Thanks to Ferdinand III of Castile (aka Saint Ferdinand or Fernando), today in history, on June 29, 1236, Córdoba—which, after the eighth-century Muslim conquest of Spain, had become one of the most important “abodes of Islam”—”passed into the hands of the accursed Christians—may Allah destroy them all!” to quote a disgruntled Muslim chronicler.

Six months earlier, in December of 1235, a daring band of Christians, led by a few knights, stormed and took a portion of Córdoba’s eastern quarter. Word reached King Ferdinand in January of 1236, even as he was in mourning over the recent death of his thirty-year-old wife from childbirth complications.

Through their envoy, the Spaniards “implored him to help them because they were placed in most grave peril.” Against the Muslim “multitude of Córdoba, they were very few” and “separated from the Moors only by a certain wall running almost through the middle of the city.” Though the conflict was at a standstill, the envoy made clear that time was not on the Christians’ side.

The king, who for years had been spearheading the Reconquista—the Christian attempt to liberate Spain from Islam—was heavily moved by such a heroic feat, and “the grief for the loss” of his wife “did not long suspend his warlike preparations.” On the same evening that the envoy arrived, Ferdinand’s advisors strongly warned him against setting out immediately. It was winter, and they cited impassable roads due to snow, rain, and floods, as well as possible ambushes from the “innumerable multitude of people in Córdoba”—to say nothing of Ibn Hud, the de facto king of al-Andalus, who was even then headed to relieve the Muslim city.

But Ferdinand “placed his hope in the Lord Jesus Christ and closed his ears” to all such talk.  He was resolved to “aid his vassals who had exposed themselves to such a great danger in his service and for the honor of the Christian faith.” After sending word to his magnates in Castile and León to muster their forces, he set off for Córdoba the very next morning, with only one hundred knights.


Related: Today in History: Christendom Takes Back What Islam Stole

Despite the terrible road conditions, the 35-year-old king rode furiously through rain and sleet and reached the great Moorish city on February 7. Ibn Hud had arrived before him with a much greater force—reportedly thirty thousand infantry and five thousand horsemen—but, instead of awaiting and meeting the Castilians, and perhaps because they had soundly defeated him earlier at the battle of Jerez in 1231, he unexpectedly withdrew back to Seville.

As might be expected, the holed-up Christians, “who were then placed in such great danger in Córdoba,” burst out in joy on seeing their king, this man “who had exposed himself to much danger so that he could succor his people!” asserts the chronicler. After rescuing the daring band of Christians, Ferdinand laid seige to Córdoba. As Christian fighters continued to pour in from León, Castile, and Galicia, the noose tightened around the Muslim city. Five months later, on today’s date, June 29, 1236, Córdoba—for centuries, “the ornament of the world,” the ancient seat of the Umayyad caliphs and Muslim Spain’s “most stalwart shield and bastion against the Christians”— surrendered to Ferdinand.

Young activists in Florida have gotten the state to adopt renewables faster : NPR

Everyone had something to say about this grand event. As seen, al-Maqqari, the normally refreshingly objective Arab historian, captured Muslim sentiment by bemoaning how “that seat of the western khalifate, repository of the theological sciences, and abode of Islam, passed into the hands of the accursed Christians—may Allah destroy them all!”


For the indigenous Christians of Spain, however, the conquest—as with all conquests of the Reconquista—was the mere righting of a wrong. As the Latin Chronicle relays, the “famous city of Córdoba, endowed with certain splendor and rich soil, which had been held captive for such a long time, that is, from the time of Rodrigo, the king of the Goths [who was killed in 711 at the battle of Guadalete, during the initial Islamic invasion of Spain], was restored to the Christian faith by the labor and valor of our King Lord Fernando.”

Ferdinand granted lenient terms: those Muslims who wanted to leave with all their movable possessions were provided safe passage; those who wished to remain and practice their religion could do so. Either way, Ferdinand proceeded to repopulate it with “new inhabitants, followers of Christ.”

Before entering and claiming kingship of his hitherto greatest (re)conquest, Ferdinand ordered that the standard of the Cross be carried before his own standard and placed on the highest minaret of the largest mosque—an event that “caused ineffable confusion and lamentation among the Saracens and, on the other hand, ineffable joy among the Christians.”

Next to be reclaimed was the great mosque of Córdoba, which Abd al-Rahman I, a highly celebrated caliph among Western academics, built in the eighth century— after demolishing and cannibalizing the materials of Saint Vincent’s, an important sixth-century Visigothic church. The mosque was “cleansed of all filthiness of Muhammad,” the archbishop of Toledo wrote, and sprinkled with holy water and salt, so that “what had once been the devil’s lair was made a church of Jesus Christ, named in honor of his glorious Mother.”


Finally, Ferdinand found the bells of Saint James Matamoros, “the Moor Slayer,” which had been seized 250 years earlier by Muslim jihadists and sent to Córdoba on the backs of Christian captives to adorn its great mosque as trophies of war.  Righting this ancient wrong, the king, who was well acquainted with the details of Muslim-Christian history, had them returned to the shrine of Santiago—carried atop the backs of captive Muslim fighters no less. 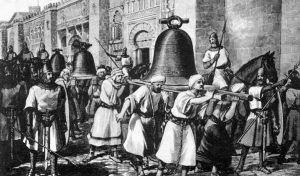 This article was adapted from Raymond Ibrahim’s new book, Defenders of the West: The Christian Heroes Who Stood Against Islam (all quoted material is sourced therein).

What Kind of Group Is the 4-nation Quad?