“They wrote a really nice letter.” says Rob Baker of Palatine, who had charted out a crossword puzzle on graph paper, stuck it in an envelope, slapped on some stamps and mailed his dream to The New York Times in the hope that the newspaper would print it. “It was very thoughtful for as bad as the puzzle was.”

Baker, 62, still has the email sent by Paula Gamache, an assistant to Will Shortz, the legendary crossword puzzle editor for The New York Times and the gatekeeper to the Holy Grail for puzzle-makers.

“Will asked me to tell you thanks, but that he must send regrets on your ‘Everyone’s a Critic’ 21x,” the email began before pointing out many ways Baker could have made a better puzzle. “Will did appreciate seeing your work, tho.”

The string of emails throughout the next 15 years all struck a similar note in finding very nice ways to say “no.”

“Oh, I’ve got plenty of rejection letters,” Baker says, putting the number in the neighborhood of 30 brush-offs. “But I’ve got one acceptance letter.”

His puzzle will appear in Wednesday’s edition of The New York Times, more than a year after he submitted it on Feb. 25, 2021. Even then, the good news email of May 27, 2021, was only a “conditional acceptance.”

“They gave me a list of the words they didn’t like, and it was a lot of words,” Baker says. “And the layout of the puzzle had to change, too, because I changed so many words.”

The subject came up when he was talking to Marla Frees, a friend who happens to be a psychic. Although she knew nothing about crossword puzzles, she told him, “You need to open up the lower right-hand corner.”

That made sense to Baker,

“I did what she said, and everything fell into place,” he says. 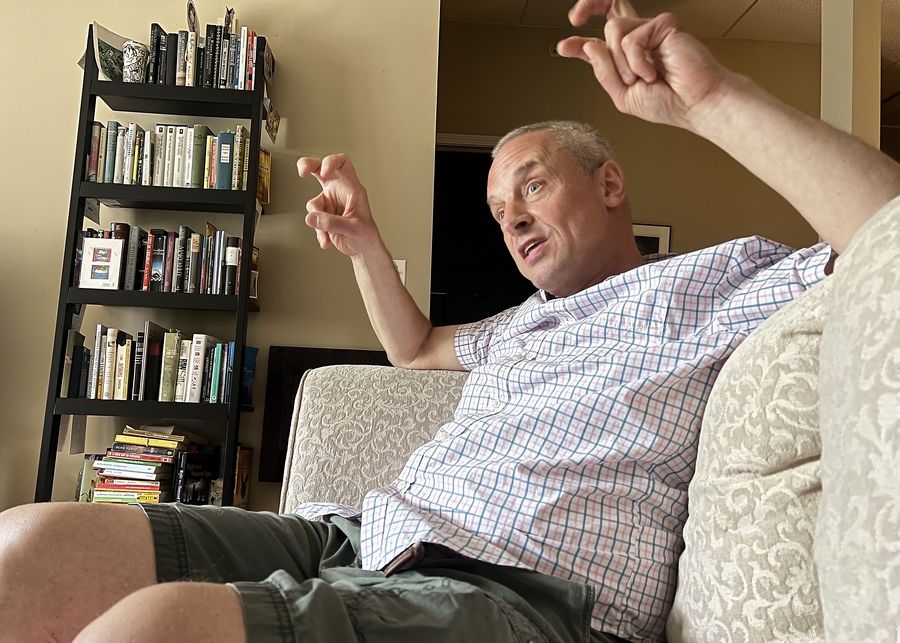 In 2007, Palatine’s Rob Baker drew his first crossword submission to The New York Times on graph paper and mailed it in. Now, he designs his puzzles on his laptop and just hits the submit button.
– Mark Welsh | Staff Photographer

Spending about 40 hours reworking the puzzle, Baker resubmitted it on June 5, 2021. “I remember being at the library and hitting the submit button,” Baker says. “I didn’t scream, but I made some sort of sound.”

The puzzle cleared that last hurdle, and Baker got a full acceptance email on June 17, 2021, at 5:20 p.m., he says. Almost a year later, he learned on June 1 that his puzzle will appear Wednesday, earning him $500. Baker also wrote his Constructor Notes, the firsthand account of every puzzle-maker who gets his puzzle into the newspaper.

“That’s the only puzzle I do every day,” Baker says of the crosswords in The New York Times. “They publish 365 puzzles a year. But for me, it’s been a fun adventure.”

Baker wishes his parents, Dick and Sheila Baker, who instilled in him a love for words, could have lived to see him get a puzzle published. But he has plenty of other people to cheer his success.

An English teacher at Barrington High School, he’s been telling students and other teachers for years that he would reach his puzzle apex one day. Having started in the days of drawing out his puzzles on graph paper, Baker now uses software on his laptop and submits electronically.

“During COVID, a lot of people started doing crossword puzzles. The competition has a lot more people,” says Baker.

A 1978 graduate of Arlington High School, Baker majored in science at Purdue University but is best known for opening the iconic Drummer & Thumbs bookstore (named after a family dog and a cat) that was a staple for literary types in downtown Arlington Heights from 1987 until 2001. 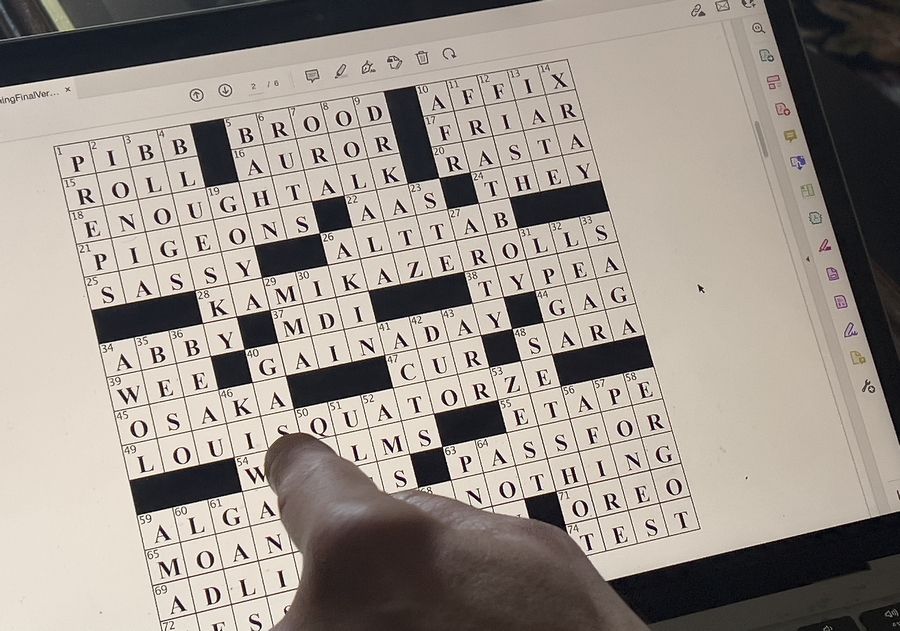 The are plenty of software programs that help design crossword puzzles, but Rob Baker of Palatine says the task is harder than it looks. Any changes have an impact on the rest of the puzzle.
– Mark Welsh | Staff Photographer

The difference between solving a crossword puzzle and creating one “is like reading a book versus writing one,” Baker says.

Having scaled the puzzle mountaintop, Baker thought he might rest on his laurels, but he’s already submitted six more puzzles. Three of those have been rejected. Three are still in limbo.

“There were a few times I thought maybe I should devote my energy to something I’m better at,” Baker says, who compares his long-awaited puzzle prize with a band finally landing on the charts with a Top 40 hit. “Maybe I’m a one-hit wonder.”

He loves thinking of themes and playing with the words that go into his crossword puzzles. He can spends hours without taking a break.

He sees the throng of people enjoying the latest puzzle craze by posting their Wordle scores online, but Baker says he’s sticking with the old-fashioned crossword puzzles.

“I haven’t tried Wordle,” Baker says. “Do I need one more thing I’ve got to do every day?”

Lawsuit filed over plane crash that killed 8 off of NC coast – The...

Cassidy Hutchinson is a ‘phony social climber who got caught’ – twitchy.com