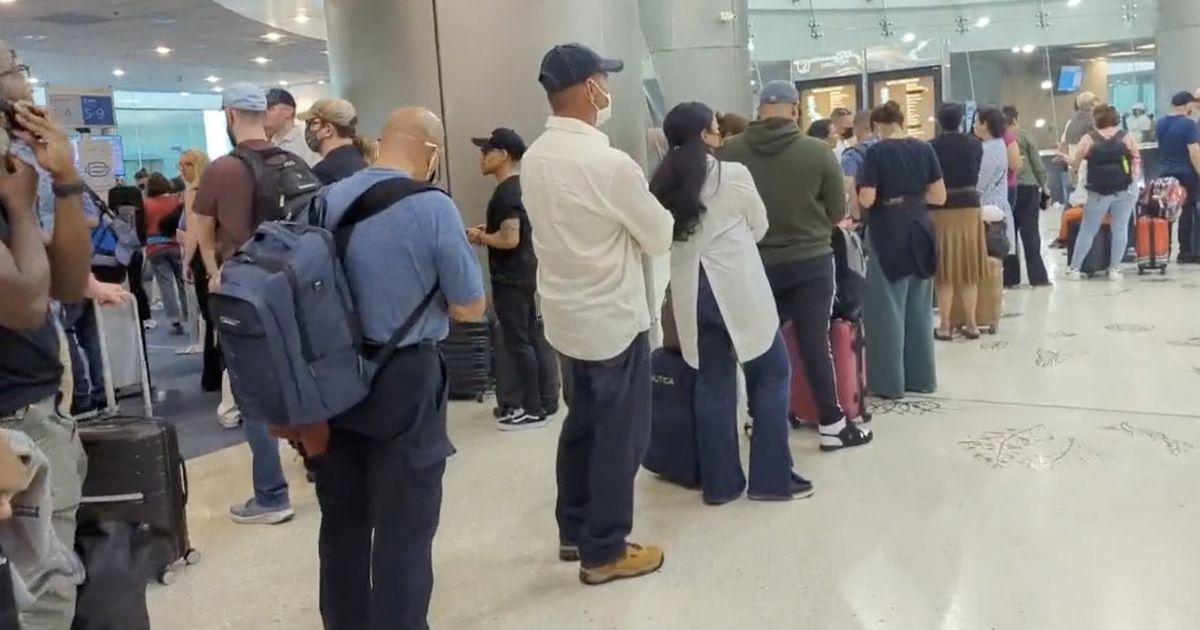 American Airlines has left a long trail of stranded travelers who bought their tickets in good faith and then got dumped on. I know because I was one of them. Twice. The airline has now announced that it is cutting back on or canceling service to several cities, none of which would have changed my life or my plans.

American Airlines doesn’t have enough pilots, in part due to Joe Biden’s forcible, mandated COVID-19 shots that sent qualified, experienced pilots running for the exits. Some pilots who took the shot report problems. MarketWatch also reports that, in a bid to preserve cash, airlines incentivized pilots to retire early. Labor rules limiting hours worked and turnaround time are also responsible. Add a post-COVID surge in travel, and you’ve got a bonafide crisis.

American Airlines is a joke in Miami tonight. #AmericanAirlines pic.twitter.com/cuIaSM81lW

American canceled 200 flights over Memorial Day weekend, but we weren’t traveling over that holiday. Delays, cancelations, and chaos are endemic to the process regardless of when people travel, it turns out.

Often, customers would get to an American Airlines terminal, only to be told that they didn’t have a pilot or first officer or were told that the pilots couldn’t fly due to restrictions on hours. This Twitter user posted, “Has #AmericanAirlines ruined YOUR trip too?? Thanks for nothing @AmericanAir!” And he had lots of company.

Has #AmericanAirlines ruined YOUR trip too?? Thanks for nothing @AmericanAir ! pic.twitter.com/5aSyvJvn5z

This happened to me and my tribe while trying to get to Mexico for a one-time family event.

There’s more, but you get the picture. A similar experience occurred on the way back. And we weren’t the only ones. The problems were so manifest that they became meme-worthy, as “Nate After Hours” posted. “Here’s where #AmericanAirlines put the first 2 days of our vacation,” he ruefully wrote. We know only too well how true this was.

Here’s where #AmericanAirlines put the first 2 days of our vacation. pic.twitter.com/QbLIraaI9u


Entire planes full of customers would be told their flight would take off the next day but then realized the flight didn’t exist, as this Twitter user complained. “Maybe #AmericanAirlines should stop selling flights with no Intension of taking off,” Andy Ladd wrote. “Why are they still selling tickets today if a whole flight got cancelled last night and there’s a long wait list? This is just wrong. My mother has waited since 4pm yesterday.” His mother and thousands of others waited and waited.

Maybe #AmericanAirlines should stop selling flights with no Intension of taking off. Why are they still selling tickets today if a whole flight got cancelled last night and there’s a long wait list? This is just wrong. My mother has waited since 4pm yesterday. pic.twitter.com/Ld1uVTBKXR

The next day passenger had to fight for remaining seats on already existing flights, resulting in more delays. And this is what that looked like. You can’t see the lines behind the counter. This is what our counter looked like. We had to settle for going to another city. American Airlines couldn’t arrange ground transportation for us, though.


American announced Tuesday that it’s cutting flights to three cities, which may free up some pilots. BestLifeOnline reported that, starting September 7, American is canceling flights to and from Islip and Ithaca, N.Y., and Toledo, Ohio. It’s also cutting service “from Charlotte, North Carolina (CLT), to Alexandria, Louisiana (AEX), and service from Chicago, Illinois (ORD) to both Ontario, California (ONT), and Saint Lucia (UVF).” It will also “suspend” flights to “Sioux Falls, South Dakota (FSD), nor will you be able to fly from Dallas/Fort Worth, Texas (DFW) to San Pedro Sula, Honduras (SAP), according to TPG.”

Let’s see if that keeps the planes running on time elsewhere.

But don’t bet on it.

Morgan Stanley CEO issues odds on whether US will fall into recession: ‘It’s going...