This is Good News Sunday, a compilation of some of the more upbeat and inspiring stories published recently by the Daily Herald:

The Aurora hero who rescued an unresponsive man from an SUV stuck on railroad tracks seconds before it was hit by a train last year has been honored again — this time by the Carnegie Hero Fund Commission.

And he still believes anyone else in his position would have done the same.

Lewis Medina is one of 16 people in the most recent batch of honorees, including two suburbanites, who will be presented the prestigious Carnegie Medal, awarded to individuals throughout the United States and Canada who risk their lives to an extraordinary degree saving, or attempting to save, the lives of others.

Medina was driving his daughter and grandson home on the evening of Oct. 9 when he saw an SUV stuck on the train tracks near his Aurora home. Medina called 911 and got out to help the unresponsive, 72-year-old driver, right at the time he realized a train was bearing down on them.

“I knew it was close, but I couldn’t leave him on the tracks,” Medina recounted later. Medina, a 60-year-old construction worker, pulled the large man from the vehicle and rolled him down the hill seconds before the train hit. Grayslake centenarian and World War II veteran Vic Erdelac holds a scrapbook of bomb pins that were removed from the bombs prior to them being dropped on targets. He and his wife, Dianne, have been married 50 years.
– Paul Valade | Staff Photographer

Riding the streetcar in his hometown of Gary, Indiana, toward a future working in the steel mills, Vic Erdelac got off one stop early.

“I wasn’t going to do that,” says Erdelac, who dreamed of a life beyond the steel mills where his widowed dad, John, spent his career and all six of his older brothers took jobs.

“We got to Fifth Avenue, and I jumped off the streetcar and went to the enlistment office.”

Erdelac, who turned 100 on Tuesday and lives in Grayslake, ended up flying 50 combat missions in Europe on a B-17 bomber for the U.S. Army Air Corps Eighth Air Force.

“This is a list of the targets we bombed,” Erdelac says, opening a scrapbook that also contains a pin from each of his 50 bombing missions. “I must have figured this would be nice to refer to someday.”

When he came home from Europe, Erdelac served as a combat instructor in Wyoming and in Texas until the end of the war, then moved back to the Midwest.

Highlights from the 2022 Congressional Baseball game

Physically active and social, Vic and Dianne, his wife of 50 years, have lived in the Saddlebrook Farms senior community in Grayslake for the past three years, where he still rides his three-wheeler bike. Having taken up woodcarving late in life, some of his figurines adorn their home. 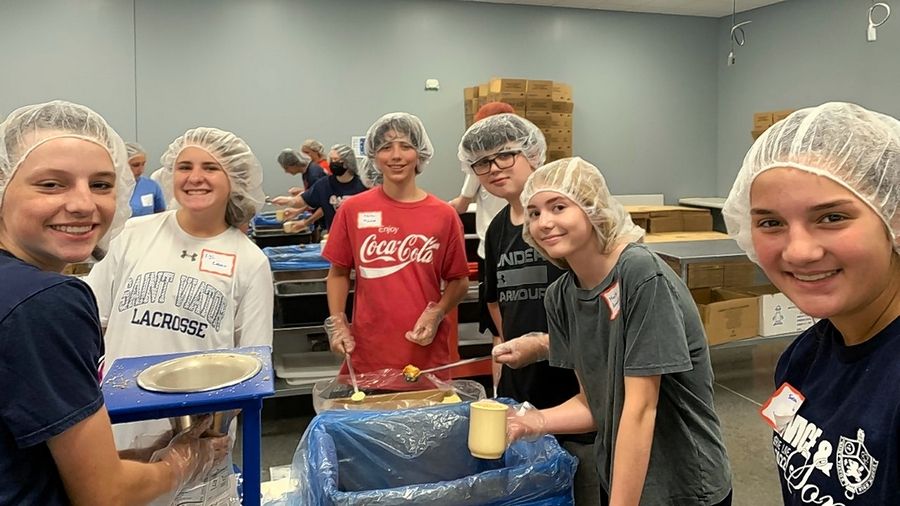 Middle schoolers had a chance to sample Saint Viator values at its recent Service & Song Camp. Some of the participants volunteered at Feed My Starving Children in Schaumburg.
– Courtesy of Saint Viator

Service is one of the core values at Saint Viator High School in Arlington Heights, and that was on full display recently as its unique Service & Song Camp returned.

A total of 50 middle school students participated in the camp, along with more than 20 students from Saint Viator who served as leaders and another 13 adults who led individual teams.

“This is such a wholesome activity,” said Pat McGarry, a theology teacher at the school and a group leader. “The kids get a taste of what service is about at Saint Viator and they get to meet other kids.”

Grayslake centenarian and World War II veteran Vic Erdelac holds a scrapbook of bomb pins that were removed from the bombs prior to them being dropped on targets. He and his wife, Dianne, have been married 50 years.
– Paul Valade | Staff Photographer

Each afternoon, teens divided up into groups and spread out to serve at social service agencies located across the Northwest suburbs and in individual homes.

Stops included making lunches for the homeless at Journeys: The Road Home in Palatine and Catholic Charities in Des Plaines; making fleece blankets and cards for veterans served by Salute, Inc. in Palatine; compiling 94 boxes of food — or more than 20,000 meals — at Feed My Starving Children in Schaumburg; collecting food from surrounding neighbors for the Wheeling Township Food Pantry; and working in the yards of 10 senior citizens.

“Gardening was my favorite,” said Megan Newell of Arlington Heights, an incoming freshman. “It’s just fun to do service with kids my age while still helping the community.”

10th Amendment of the Constitution PDF

Robin Vos signals there may be a way to re-do Wisconsin’s 2020 election: report