A new era is beginning this weekend as pop culture fanatics from across the country celebrate 50 years of comic cons in Rosemont — and the first year under the Fan Expo Chicago banner.

Familiar: Nerdy merch as far as the eye can see, smiling celebrities meeting their fans, and dedicated artists sharing their work.

Fresh: A more intimate, integrated showroom floor, where a guest could, for example, get a tattoo of the Joker’s face from a vendor just steps away from where Troy Baker, the man who voiced him in “Batman: The Long Halloween,” is signing autographs.

While a sensei representing Chicago’s Japanese Culture Center gave an Aikido demonstration in the lobby, “Star Wars” fans found their seats in the main ballroom to hear from Carl Weathers, the “Rocky” and “Predator” star who, at age 74, is now an actor and director on “The Mandalorian.”

Weathers told the crowd he landed the role of Apollo Creed by stretching the truth about his boxing experience, a tactic he says all young actors must adopt.

“Never say no. If they ask you … ‘You sky-dive, right? Did you do it without a parachute?’

“The reason it works is so simple,” he said, addressing the audience directly. “You love the baby. If I love the baby and the baby loves me, you’re gonna love me, too!”

A Georgia monument, seen by some as satanic, was damaged from a predawn explosio : NPR

Before spinning his Hollywood tales, Weathers acknowledged the Black entertainers like Woody Strode and Harry Belafonte who inspired him, and he made a few political statements. “Every human being has a right to state what they want to do with their bodies,” he said to applause from the crowd of about 300 people. 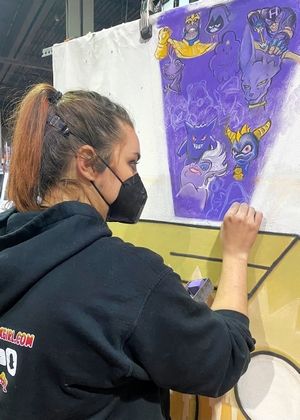 Beth Zwolski Tobias, aka The Chalk Girl, gets ready to add some more purple-hued characters to her collage Friday on the convention floor at Fan Expo Chicago in Rosemont.
– Sean Stangland | Staff Photographer

Back on the show floor, Beth Zwolski Tobias of Trevor, Wisconsin, was getting ready to add more purple-hued characters to a chalk collage — Thanos, Hawkeye and Ursula the Sea Witch soon would be joined by Waluigi and Grimace. Attendees can see Zwolski Tobias, aka The Chalk Girl, add to the piece celebrating 50 years of Chicago comic cons all weekend long.

A few booths away, former newspaper designer Pat Kenrick of Hampton, Virginia, showed off prints and mugs bearing his watercolor paintings of characters from titles as divergent as “The Golden Girls,” “Winnie the Pooh” and “Fullmetal Alchemist.”

“I do this because I enjoy people’s reactions on my take on the piece,” Kenrick said. “It’s a way to make a connection to people. And to me, that’s what art is.”

Kenrick and his wife, Alexis — who came up with the name for their business, Amourable Art — travel the country with his art and have visited Chicago-area conventions eight or nine times. He said Chicago is his second-favorite food town behind New Orleans, and he offered a tip for his fellow travelers: “Don’t eat sushi in Colorado. Eat sushi in Seattle.”