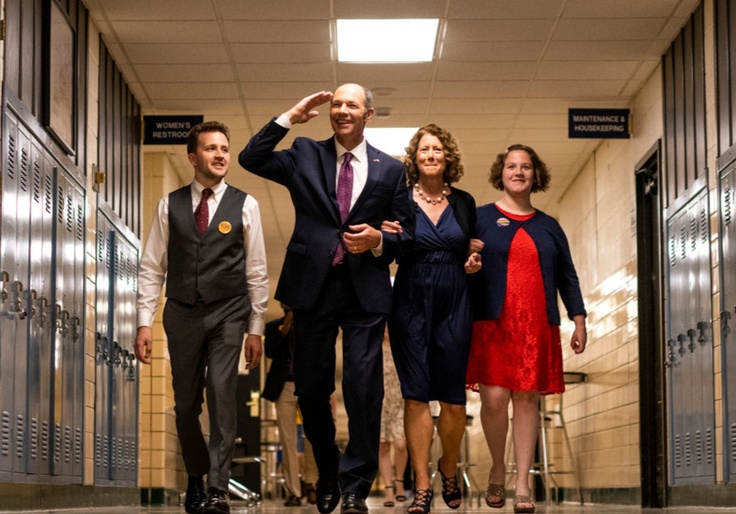 Iowa Democratic Senate candidate Mike Franken says there’s a Republican-led, capitalist-evangelical plot to “dumb down” youth through “a war on education,” designed to gain an electoral advantage in the years to come.

During a campaign event in Red Oak last week, Franken told voters Republicans are uniting “the über-capitalists … and the ultra-right evangelicals” on educational issues to “make people dumb and lemmings.”

“Is this what Newt Gingrich wanted everybody to do in the ’90s?” Franken said, according to a video of the event obtained by the Washington Free Beacon. “Dumb down America as much as we can because the demographics are working against the Republican Party? It’s true. It appears so.”

Former speaker of the House Newt Gingrich told the Free Beacon he found Franken’s remarks “laughable” and that the Senate candidate “is falling for the teachers’ union line.”

“As a Ph.D. in European history and author of more than 40 books, I find it laughable that Franken thinks I could be anti-learning. I participated in the launch of President Reagan’s dramatic report A Nation at Risk in 1983,” Gingrich said. “The teachers’ unions and their Democratic Party loyalists have fought against reform every step of the way. Children should not be trapped in terrible schools that cripple their future. Parents have the right to know what is being taught to their children.”

Franken did not respond to a request for comment.

The retired Navy vice admiral, who served under former president Barack Obama and as a military adviser to former senator Ted Kennedy (D., Mass.), has no stance on public education listed on his campaign website. He has, however, taken strong stances on increasing abortion access, expanding Medicare, and combating climate change. The Iowa Unity Coalition, which has endorsed Franken, supports tuition-free college education for all state residents. A Harvard University study in 2014 found that a Massachusetts tuition-free program lessened students’ college completion rate.

Revolve Beauty Is Full of These Viral TikTok-Trending Products

Republicans have made education a significant election issue, as parents have expressed concerns over a public education system they believe has abandoned the teaching of core academic subjects and doubled down on racially divisive rhetoric and courses. The Republican National Committee in 2021 adopted a resolution that condemned critical race theory and “antiracist” school curricula. Congressional Republicans in January put forth as part of their midterm platform a Parents’ Bill of Rights, which would publicly disclose state education budgets and curricula.

Franken did not elaborate on his opposition to Republicans’ education platform, which could potentially alienate some Iowa voters concerned with radical teachings about America’s history in schools. The state House in 2021 entertained a bill that would have banned the New York Times‘s 1619 Project from public education.

Franken’s Democratic nomination this year was unexpected. In 2020, he lost a primary race to Theresa Greenfield, who would go on to lose her election to Sen. Joni Ernst (R.). Franken in June bested Democratic candidate Abby Finkenauer to win the party’s nomination for 2022.

A Grassley campaign spokeswoman said Franken’s comments were “lockstep with the Biden White House,” which in 2021 “orchestrated a memo from the National School Board Association in an effort to intimidate parents by unleashing federal antiterrorism surveillance tools on them at school board meetings.”

“Mike Franken didn’t read the memo from last November’s gubernatorial election in Virginia, the near upset gubernatorial race in New Jersey or the school board recall election in his dream state of California,” Michaela Sundermann told the Free Beacon. “Waging a war on parents is not a winning strategy. Chuck Grassley fights for the fundamental right of parents to have a say in their child’s education.”

Robin Vos signals there may be a way to re-do Wisconsin’s 2020 election: report