Rep. Cori Bush (D., Mo.) spent years cultivating a relationship with a pro-Palestinian activist who once tweeted that she wants to “set Israel on fire with my own hands & watch it burn to ashes along with every Israeli in it.”

Bush, a member of the far-left “Squad” of lawmakers known for their anti-Israel attitudes, has been working alongside anti-Israel activist Neveen Ayesh since at least 2017, according to information published by Canary Mission, a watchdog group that tracks anti-Israel and anti-Semitic activists online. While Bush has publicly condemned attacks on the Jewish community, her relationship with Ayesh and other anti-Israel activists drawing accusations that these statements are empty rhetoric.

Ayesh, who has been active in several leading anti-Israel groups, including American Muslims for Palestine, organized a 2020 fundraiser for Bush that featured Rep. Rashida Tlaib (D., Mich.), one of Congress’s most vocal opponents of the Jewish state, and Linda Sarsour, an activist who has repeatedly used anti-Semitic rhetoric. An invitation for the fundraiser, titled “Muslims for Cori,” is accessible on the ActBlue website, an online donation portal used by Democrats.

The relationship between Ayesh and Bush is raising fresh questions about the congresswoman’s support for anti-Israel causes and willingness to partner with individuals who have expressed hatred toward Jewish people.

“Neveen Ayesh has shown support for terror organizations, wants to kill every Israeli, and called being Jewish a crime worthy of the rope,” a Canary Mission spokesman told the Washington Free Beacon. “Her anti-Semitism is publicly known information. It was even discussed on the floor of the Missouri House of Representatives. However, Cori Bush had no problem benefiting from a fundraiser organized by Ayesh and enjoys a long-standing relationship with her.”

Bush, the watchdog group said, must provide her constituents with “an explanation.” A Bush spokesman did not respond to a Free Beacon request for comment on the 2020 fundraiser and the congresswoman’s relationship with Ayesh. Bush and Ayesh were pictured together as recently as 2020 and as early as 2017 during a trip to the Middle East.

Ayesh in February defended Hamas, comparing the group’s armed resistance against Israel to Ukraine’s war against “their oppressors” in Russia. People “somehow have an issue with Palestinians doing the same,” she tweeted. 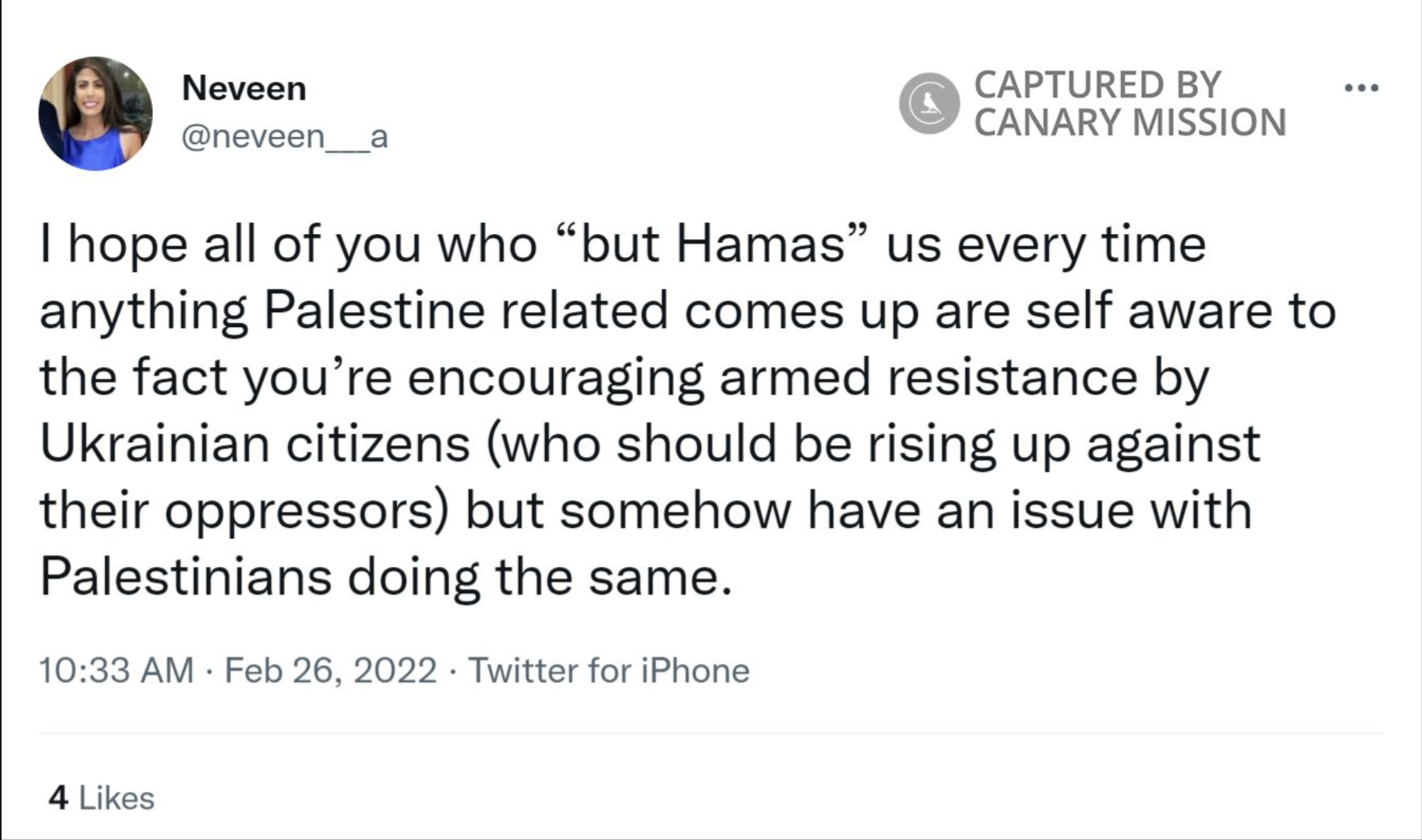 Ayesh has lambasted Israel on social media and wished death upon its citizens, posts that were made before she formed an alliance with Bush. Many of the most controversial tweets have since been deleted but remain archived online, with original screenshots, by Canary Mission.

“I want to set Israel on fire with my own hands & watch it burn to ashes along with every Israeli in it,” Ayesh tweeted in February 2014.

“Once again I want to personally set Israel & all the Israelis in it on fire & watch them burn to ashes. Burn you bastards #IHateYou,” she wrote one month later. 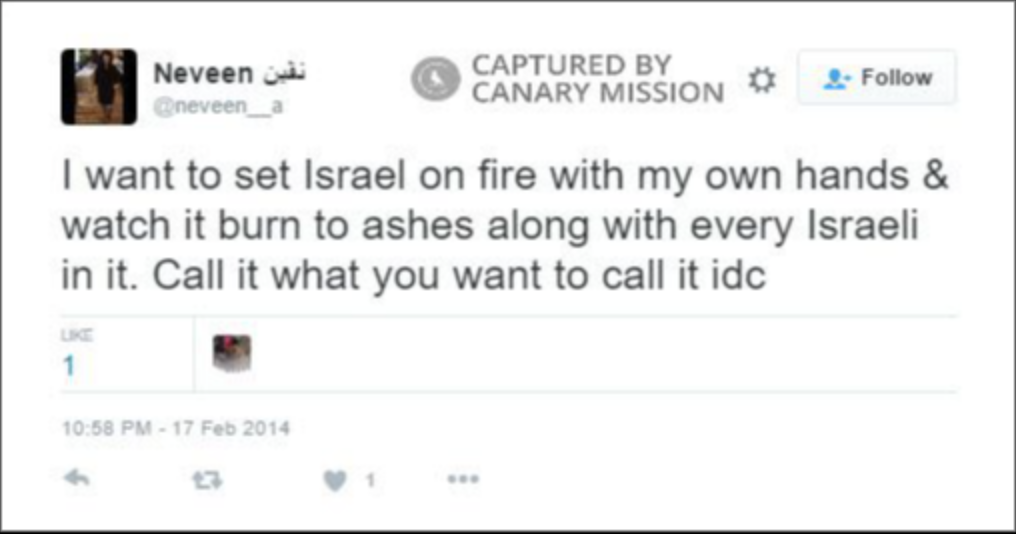 “I hope I will be alive to witness the death of Israel,” another March 2014 tweet says.

“I tried befriending a Jew once. Worst idea ever,” she stated in September 2013.

In August 2011, Ayesh tweeted that “being a Jew” is a crime “worthy of the rope” and several days later wrote, “Jews #WorstThingInTheWorld.”

Ayesh also has expressed a willingness to join Hamas, the U.S.-designated terror group that has killed Americans and Israelis.

“I should join al-Qassam,” Ayesh tweeted in August 2014 alongside a photo of armed Hamas militants. “Be the first female to join their group lololol #IdLoveToThough.” 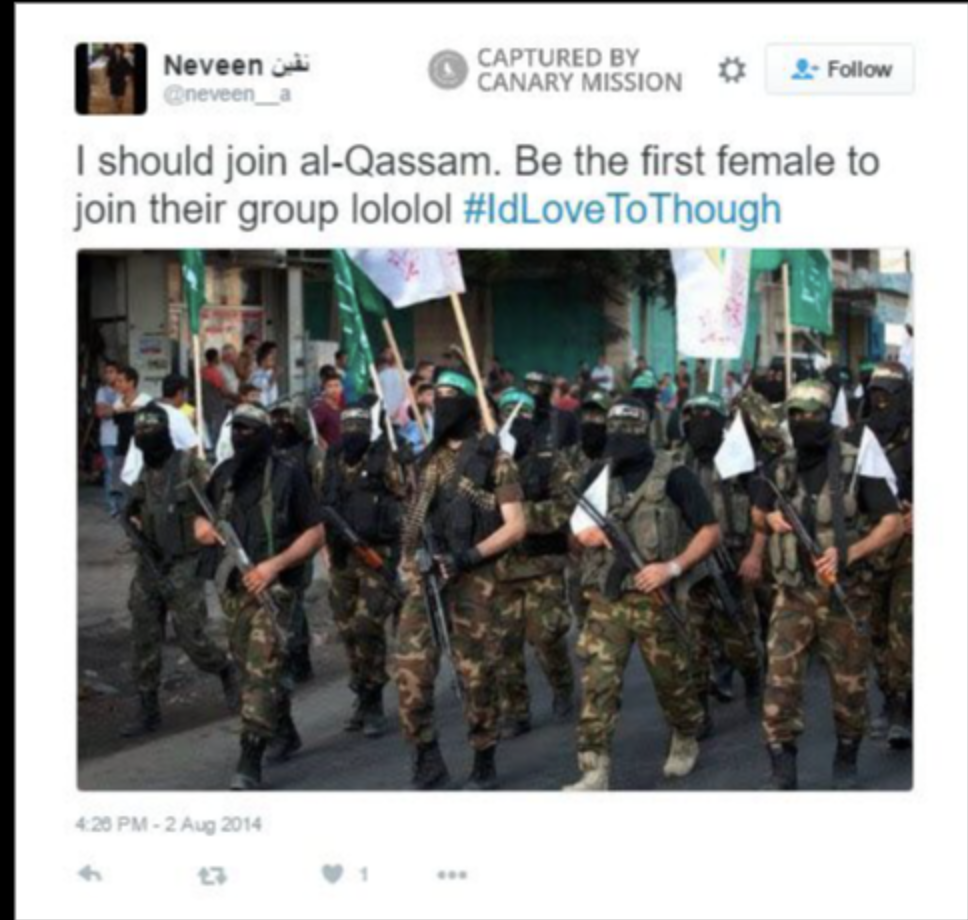 Ayesh also has compared Israel to the Nazis, writing in February 2017 that it looks like Israeli Jews “miss nazism considering they nostalgically replicate&apply its values&model unless theres something I dont get w/ Zionism.” 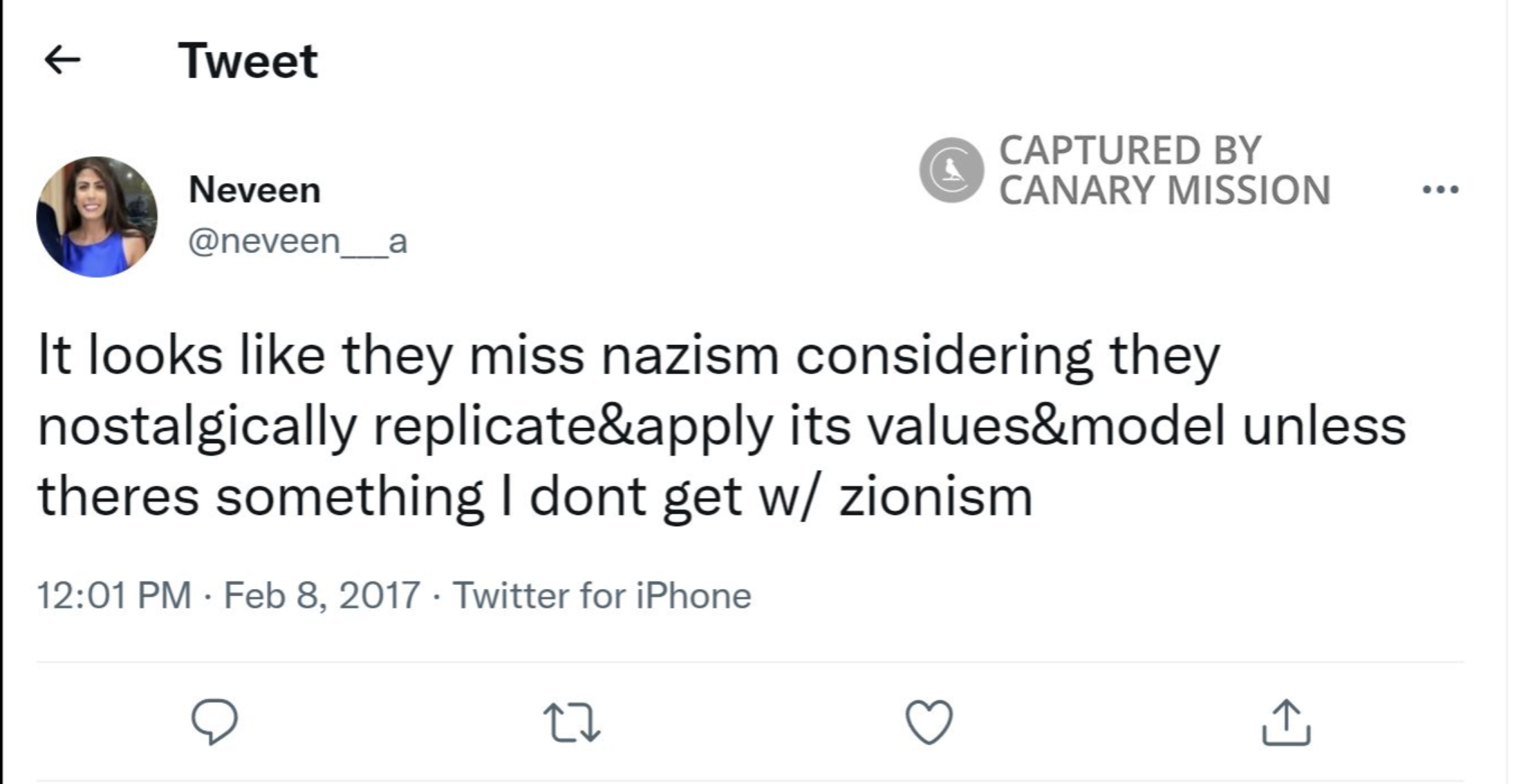 The 2020 fundraiser with Bush was held just months after members of the Missouri State House of Representatives publicly chastised Ayesh following her testimony in favor of a bill to economically boycott Israel. Ayesh supported the bill and said the Boycott, Divestment, and Sanctions (BDS) movement, which she supports, is peaceful. Lawmakers and experts have condemned the BDS movement and other anti-Israel campaigns as fueling anti-Jewish hatred, which has reached record levels in America, particularly on college campuses, where BDS is popular.

Ayesh said during the hearing that she studied in the United States “with Jewish people, befriend[ed] them, and some of them are the closest people to me today”—though her tweets paint a different picture.

Following her testimony in favor of the anti-Israel legislation, lawmakers read Ayesh’s anti-Semitic tweets publicly and condemned her rhetoric.

A ‘viscerally angry’ 79-year-old Biden has a plan to lower shipping costs – twitchy.com

The Socialist Politician Who Shows Us That Trump Can Run for Re-Election Despite Merrick...