Rep. Alexandria Ocasio Cortez arrived to stir up the crowd outside the Supreme Court following the final ruling on Dobbs v. Jackson Women’s Health. AOC has questioned if anyone should have a baby because she is convinced the world will end in about eight years, thanks to climate change. Her climate hysteria makes her a fervent supporter of a woman’s right to kill her baby on demand, throughout pregnancy and without apology. So today is very upsetting for AOC.

In a 6-3 decision, SCOTUS upheld the ability of Mississippi to restrict abortion after 15 weeks by declaring the Constitution does not confer a right to abortion and returning the issue of abortion to elected branches of government. The precedents in Roe v. Wade and Planned Parenthood v. Casey made it difficult for states to restrict or regulate abortion. The majority opinion authored by Justice Samuel Alito explicitly overturned them. While Chief Justice Roberts did not join the majority opinion, he voted yes and issued his own concurring opinion.

Nothing is going to change about AOCs ability to exercise her “reproductive rights.” She is a native of New York, where Gov. Andrew Cuomo lit up the World Trade Center in Pepto-Bismol pink to celebrate passing a law that permitted abortion for nearly any reason up to the moment of birth. Her job and current residence are in Washington, D.C., where abortion is currently legal throughout pregnancy. Yet, here she is calling the Supreme Court decision “illegitimate” and encouraging people to get “into the streets”:

BREAKING: Congresswoman @AOC has arrived in front of the Supreme Court and is chanting that the Supreme Court’s decision to overturn Roe v Wade is “illegitimate” and calls for people to get “into the streets” | @TPUSA pic.twitter.com/jNkCYDrLtz


Note the accommodating woman on her left who is providing the perfectly coiffed elitist playing revolutionary, AOC, with a megaphone. As the Congresswoman grins like this is all good performative fun, she may not realize she is standing next to a radical Communist organizer named Sunsara Taylor.

Taylor is a self-proclaimed member of the Revolutionist Communist Party (REVCOM), which calls for “extremely violent means” to protect abortion rights. She claims she is a follower of Bob Avakian, a REVCOM founder who has called for violent revolution and overthrow of the existing U.S. government for decades. Here is Avakian on abortion rights (emphasis added):

The whole question of the position and role of women in society is more and more acutely posing itself in today’s extreme circumstances—this is a powderkeg in the U.S. today. It is not conceivable that all this will find any resolution other than in the most radical terms and through extremely violent means. The question yet to be determined is: will it be a radical reactionary or a radical revolutionary resolution, will it mean the reinforcing of the chains of enslavement or the shattering of the most decisive links in those chains and the opening up of the possibility of realizing the complete elimination of all forms of such enslavement.

Taylor has been calling for revolution and organizing protests since George W. Bush’s administration. At that time, she was on the advisory board of The World Can’t Wait – Drive Out the Bush Regime, according to the group’s website. The group was founded in 2005:

World Can’t Wait is a national movement formed to halt and reverse the terrible program of war, repression and theocracy that was initiated by the Bush / Cheney regime and the ongoing crimes that continue to this day. Founded in 2005, the original mission of The World Can’t Wait – Drive Out the Bush Regime was to “create a political situation where the Bush administration’s program is repudiated, where Bush himself is driven from office, and where the whole direction he has been taking U.S. society is reversed.”

The page with her bio has been removed, but here is a screenshot of the archived preview: 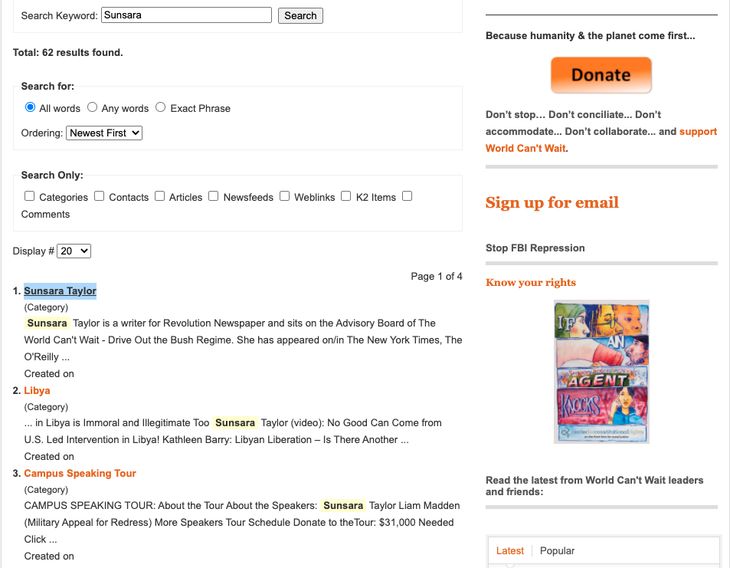 Taylor is a fierce pro-abortion activist and now works with Refuse Fascism. This group popped up during the Trump administration. These aging commies all see themselves in the 1930s, fighting fascists in Europe. The problem is that 21st-century fascism is the ideology of their international socialist left-wing benefactors such as George Soros and the World Economic Forum. Communism is the form of government in Russia and China. America is a third way that doesn’t fit in their fictional struggle. So they just look ridiculous.

The Left’s ability to astroturf new groups for every issue is impressive. On Refuse Fascism’s website, a new group has popped up. Taylor is wearing a green “Rise Up 4 Abortion” scarf, the new group’s name. Taylor is, of course, all over the new group’s website. You will find the same faces in all radical left-wing protest movements. They use different t-shirts, banners, and slogans to make their grassroots efforts look bigger than they actually are. One person wearing three different t-shirts on three different occasions is still just one person. But there were three protests.


Many radical astroturf gang members are also trained agitators, and Taylor has been in the movement for decades. You can see her getting nervous participants to join the chant in the video. Every good riot starts with a monotonous chant repeated with gusto. In the summer of 2020, Refuse Fascism joined the melee and felt they could sustain “60 days of struggle”. They organized protests in 23 cities during September to use the threat of violence to discourage people from voting for President Trump. From their website:

No one can say that this can’t lead to a situation where Trump is driven out before the elections – but short of that, sustained protests in October can and must lead to a situation where on Election Day people don’t just vote against Trump in big numbers but there are mobilized people/forces prepared to oppose – with massive, sustained non-violent protest – the fascist forces we know the Trump regime is planning to unleash.

You don’t drive anyone out of office with sustained non-violent protest. You also don’t defeat real fascists that way. Does AOC understand who she is hanging out with? Taylor is a communist who has called for the violent overthrow of the U.S. government for decades. One could say that Taylor is pro-insurrection as well as pro-abortion. We should pray AOC doesn’t give Taylor a tour of the Capitol.