We are here for you to provide the important Recent and Latest Current Affairs 30 July 2022, which have unique updates of Latest Current Affairs 2022 events from all newspapers such as The Hindu, The Economic Times, PIB, Times of India, PTI, Indian Express, Business Standard and all Government official websites. The Eleventh Agricultural Census (2021–2022) has been launched by Union Minister Narendra Singh Tomar, Ministry of Agriculture & Farmers Welfare (MoAFW) to collect data on a variety of parameters, including operating holdings. For the first time, data will be collected using smartphones and tablets.

Essential Feature of Agriculture Census
i. The agricultural census is the primary source of data on a number of factors, including the number and size of operational holdings (small and marginal agricultural landholdings), their size, class-wise distribution, land use, tenancy, cropping pattern, etc. Background:
i.In 2020, India and the US signed a USD 2.6 billion( worth around ₹14,000 crore) contract for 24 MH-60R Romeo helicopters which will be built by Lockheed Martin Corporation.
ii.The delivery of all 24 helicopters is set to be completed by 2025.
Key Points:
i.Initially, These multiple-mission-capable helicopters would be based at Naval Air Station Garuda at Kochi, Kerala and put through intensive flying trials for integration into the Indian Navy fleet.
ii.These add to the first three MH 60R ‘Romeo’ helicopters delivered in the US in 2021, these are being used for training of the Indian Navy crew.
iii.The induction of these state-of-the-art mission-capable platforms will enhance the integral anti-submarine warfare capabilities.
iv.This will replace the ageing fleet of British Westland Seaking anti-submarine helicopters.
Indian MH-60R:
Lockheed Martin released the first look of the Indian MH-60R on the occasion of India’s Navy Day 2020 i.e., 4th December 2020.
Features:
i.The Indian MH-60R will feature the common cockpit avionics suite.
ii.The helicopter comes with multi-mode radar with Inverse Synthetic-Aperture Radar (ISAR) capability, Multi-Spectral Targeting system, a comprehensive electronic warfare and self-protection suite, Advanced Low-Frequency Dunking Sonar, GPS-capable sonobuoys, secure voice communication, SATCOM, and datalink systems. 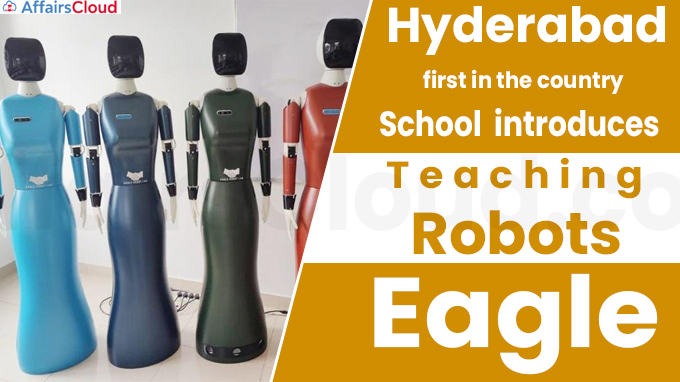 i.The school deployed a total of 21 teaching robots in its branches located in Hyderabad, Bengaluru, and Pune.
ii.Children can connect with the assessment and content of the robot through devices like mobiles and laptops.
About Eagle Robots:
i.The robots are capable of teaching students from classes V to XI. These robots will assist the teachers and also teach students in standalone mode.

ii.They are capable of teaching students in 30 different languages and accessing them at the end of the class using analytics.
iii.They are also programmed to clear doubts of the students and provide content on mobile phones or laptops.
iv.The robots are developed by an in-house team comprising engineers from IIT, content developers, and experienced teachers over a period of two years.
What are robots?
Robots are machines that can be programmed to carry out complex series of tasks automatically. 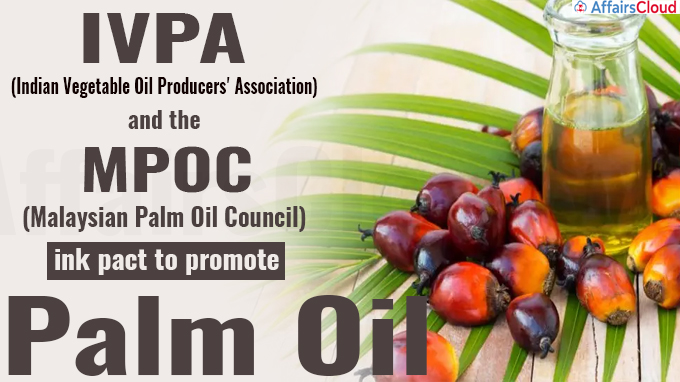 The Indian Vegetable Oil Producers’ Association (IVPA) signed a Memorandum of Understanding (MoU) with the Malaysian Palm Oil Council (MPOC) to enhance cooperation between Malaysia and India in the palm oil industry and to promote the usage of palm oil.

Objective-
It aims to help educate Indian consumers on the nutritional and health benefits of palm oil and improve their overall understanding of palm oil and its applications.
What is in the MoU?
i.MPOC collaborated with IVPA for the greater acceptance of Malaysian palm oil among Indian consumers, food manufacturers and other end-users.
ii.It will expand cooperation in areas of mutual interest and will promote the development and use of Malaysian palm oil and Malaysian Sustainable Palm Oil (MSPO)-certified palm oil.
iii.The MoU will encourage the exchange of data on palm and edible oils and fats related business, besides technical, policy and administrative information.
iv.Under the agreement an expert panel will be created to assist development of India’s palm oil industry through the provision of information and expertise on latest technology applications.
Note: RBI Extends Window for Payment Aggregators to Apply for License The Reserve Bank of India (RBI) has given another window to Payment Aggregators (PAs) in existence as of March 17, 2020 to apply to the RBI for a license by September 30, 2022.

Payment Aggregators (PAs)
PAs are entities that facilitate e-commerce sites and merchants to accept various payment instruments from customers for completion of their payment without the need for merchants to create separate payment integration systems of their own.

Key Points:
i. The Payment Aggregator (PA) framework, which the RBI formally launched in March 2020, mandates that only entities authorized by the RBI to acquire and provide payment services to merchants.

ii. The firms that have been granted permission to act as PAs in India will be directly supervised by the RBI when providing payment services to merchants.
iii. Under the strict evaluation process set forth by the RBI, more than 185 fintech enterprises and startups submitted their applications for a license to operate as PA.
So far, licences have been granted to Razorpay, 1Pay, Innoviti, and Stripe. 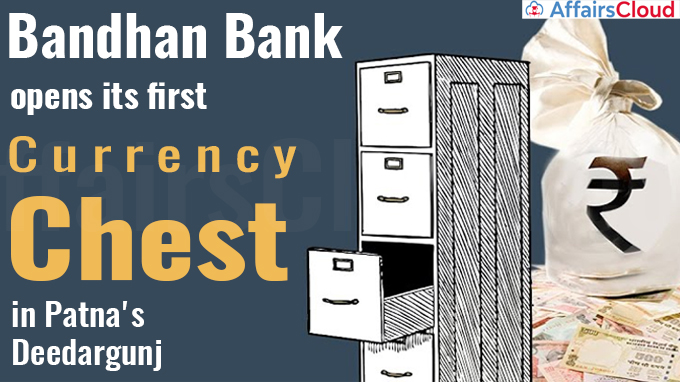 On 28th July 2022 Bandhan Bank opened its first currency chest in Deedargunj in Patna, Bihar which helps in cash management for bank branches and ATMs.

About Currency Chest:
i.Currency chests are depositories established by the Reserve Bank of India (RBI) to facilitate the distribution of new currency notes, recycle old notes and to retain cash reserves of the banks. Highlights:
i.This OPD Add-on cover includes no waiting period that can be availed from Day 1 and covers more than 32000 doctor networks in over 70 plus cities.
ii.This also offers a range of special consultations such as Gynaecology, Orthopaedic, Paediatric, Ophthalmologist, Physiotherapist and Nutritionist, referred or prescribed by a General Practitioner, in relation to any illness or injury.

Parle Topped Rankings for Most Chosen FMGG Brands in India for the 10th year in a row: Kantar India Report 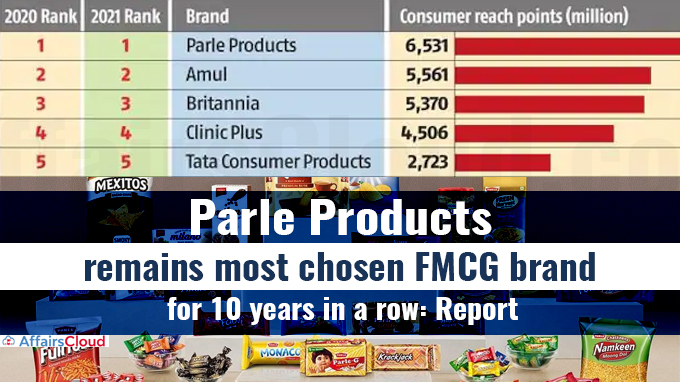 The report ranks the most chosen FMCG brands based on the Consumer Reach Points(CRPs). 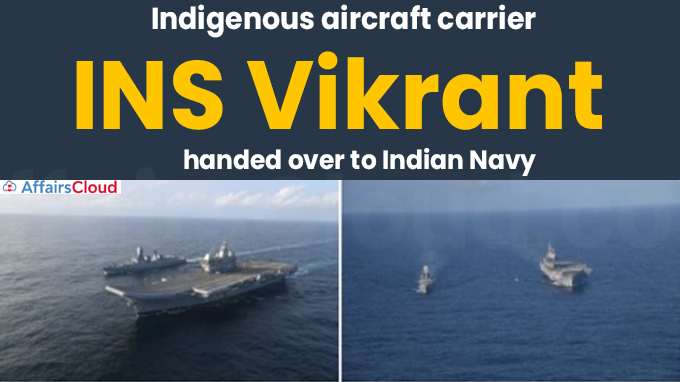 The Cochin Shipyard Limited (CSL), a Public Sector Shipyard under the Ministry of Ports, Shipping, and Waterways, handed the Indian Navy with the India’s First Indigenous Aircraft Carrier (IAC) Vikrant, the largest warship built in India.

i. IAC Vikrant was designed by the Indian Navy’s Directorate of Naval Design (DND) and was built at a cost of around Rs. 20,000 crore. It contains 76 % indigenous content.
ii. The aircraft carrier will first be deployed to the Western Naval Command, which is headquartered in Mumbai, Maharashtra.
iii. Vikrant has placed India among a select group of nations with the exclusive capability to indigenously design and build an aircraft carrier—along with the United States (US), the UK, Russia, France, and China.
About Indian Navy:
Chief of Naval Staff (CNS) – Admiral R Hari Kumar
Founded – 26 January 1950
>> Read Full News

Google Maps has launched its “Street View” service across 10 cities in India which will offer a 360-degree view of landmarks, streets, residential areas, or any location.Google has partnered with Genesys International, an advanced mapping solutions company, and Tech Mahindra to offer a detailed look at any street or location.

ii.Street View imagery will blur out the faces of individuals and license plates due to safety of privacy.
iii.Data collection was entirely done by Tech Mahindra and Genesys International. 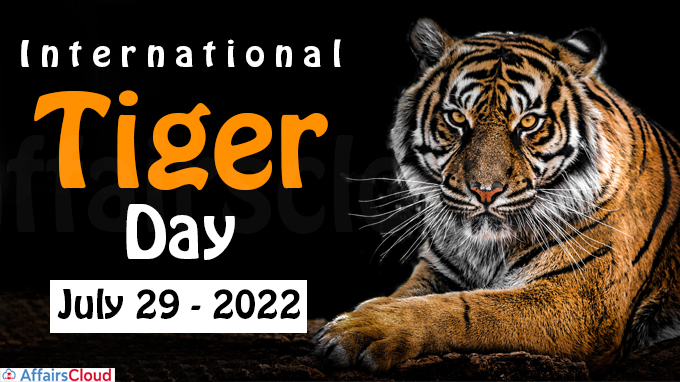 International Tiger Day, also known as Global Tiger Day, is annually observed across the globe on 29th July to create awareness about the decreasing population of Tigers and to highlight the importance of the conservation of Tigers (Panthera tigris). 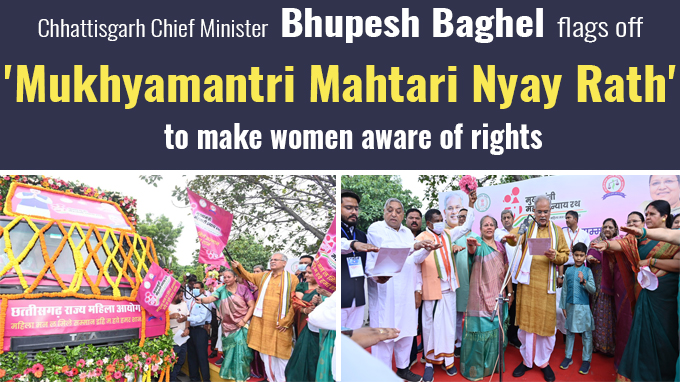 The  Chief Minister (CM) of Chhattisgarh, Bhupesh Baghel flagged off Mukhyamantri Mahtari Nyay Rath from Raipur with the aim of spreading legal awareness among women. The Rath Yatra was flagged off on the occasion of Hareli Tihaar festival (28th July 2022).

Highlights:
i.Rath Yatra was flagged off with the slogan of “Baat He Abhimaan Ke, Mahila Man Ke Samman Ke”.
ii.The CM also administered the oath of ensuring security, justice and empowerment of women.
iii.In the first phase of Rath Yatra it will initially tour nine districts of the state that receive the Mineral Trust fund, i.e. Durg, Raipur, Rajnandgaon, Balodabazar-Bhatapara, Mahasamund, Janjgir-Champa, Gariaband, Dhamtari, Kanker.
About Mukhyamantri Mahtari Nyay Rath:
i.Mukhyamantri Mahtari Nyay Rath Yatra will go from village to village in all the districts to create mass awareness about the legal provisions and constitutional rights of women.
ii.The Information regarding women’s rights and concerning laws will be spread through short films, messages and brochures.

Punjab Government signs pact to become member of ‘Under2 Coalition’ The Punjab Government signed a Memorandum of Understanding (MoU) for becoming a member of the global network called Under2 Coalition to address the issues of climate change.
Signatories:
The MoU was signed by Manish Kumar, Director, Environment and Climate Change on behalf of the government, and Divya Sharma, India Executive Director, Climate Group on behalf of Under2 Coalition.
Key points:
i.With this agreement, Punjab has become a member of the largest network of 221 states/provincial governments of 43 countries committed to reducing carbon dioxide(CO2) and Green House Gas(GHG) emissions in line with the Paris Agreement adopted at a United Nations Climate Change Summit in Paris in 2015.
ii.The MoU will help in mitigating climate change impacts which include shifting weather patterns that threaten food production, rising sea levels that increase the risk of catastrophic flooding and associated health-related issues.
iii.The agreement will support the state’s commitment to build a robust climate-resilient ecosystem and convert the climate vulnerabilities into opportunities.
Note- India ranked 7th  in the Global Climate Risk Index 2021.
About Punjab:
Governor– Banwarilal Purohit
RAMSAR sites- Nangal Wildlife Sanctuary , Kanjli
Rivers- Jhelum River, Ravi River

Gunman kills 2 Iowa State Univ. students before turning the gun on himself

Get Started with Our Guide to Makerspace