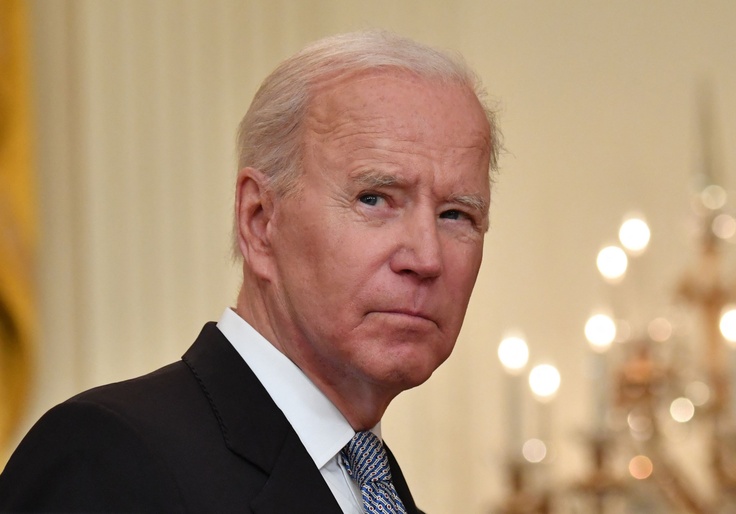 The $433 billion Inflation Reduction Act will have no meaningful impact on consumer costs, according to the economist President Joe Biden cites most often.

By the end of 2031, the latest Democratic reconciliation bill would shave just .33 percent from the Consumer Price Index, the traditional inflation metric, according to a report from Moody’s Analytics chief economist Mark Zandi. The current CPI is 9.1 percent, the highest in over 40 years.

Zandi and his coauthors say the Inflation Reduction Act will only “nudge the economy and inflation in the right direction.” And that conclusion strains the definition of “nudge.” Americans will see no change in inflation due to the bill, the report states, until the third quarter of 2023—a .01 percent decrease.

Zandi’s analysis is often shared by the White House or the president himself. During a February 2021 speech, Biden cited Zandi’s work twice while pitching his economic agenda. In July of last year, Senate Majority Leader Chuck Schumer (D., N.Y.) called on lawmakers to read Zandi’s favorable report on the bipartisan infrastructure bill.

But Zandi’s latest findings have not deterred the White House. Both Chief of Staff Ron Klain and Deputy Press Secretary Andrew Bates retweeted a CNN reporter’s tweet that quotes the report as saying the bill will “meaningfully address climate change and [reduce] the government’s budget deficits.”

The White House’s celebration of the report signals how desperate they are to pass a budget reconciliation package before the midterm elections. Initially named “Build Back Better,” the bill has seen a number of rebranding attempts as voters increasingly sour on Biden’s presidency over the economic concerns.

Zandi and his coauthors conclude that the inflation reduction bill lowers consumer costs for some medications, something the White House highlighted, although they decline to specify the total savings. Moreover, the deflationary benefits from lower health costs, the authors write, do not kick in until “mid-decade.”

“Moreover, large corporations will attempt to pass through some of their higher tax bill to consumers in higher prices for their wares,” the authors write, although they add that this may be difficult “in competitive markets.”

English in a Minute: Child's Play

The immediate impact of the bill may also slow growth as well, the authors find. Starting in late 2023 for over a year, according to data in the report, the bill will slightly shave off expected GDP growth. Despite those data, the authors say the Inflation Reduction Act will add “an estimated 0.2 percent” to GDP by the end of 2031.

The Inflation Reduction Act contains $433 billion in spending and purports to raise $750 billion in revenue from higher taxes and lower Medicare prescription drug costs. A report from the nonpartisan Congressional Joint Committee on Taxation found that, despite White House claims, Americans making below $400,000 a year would see higher taxes.

Sen. Joe Manchin (D., W.Va.), who led negotiations on the bill, grew defensive when asked by Fox News about tax provisions in the bill and whether the bill will meaningfully address inflation.