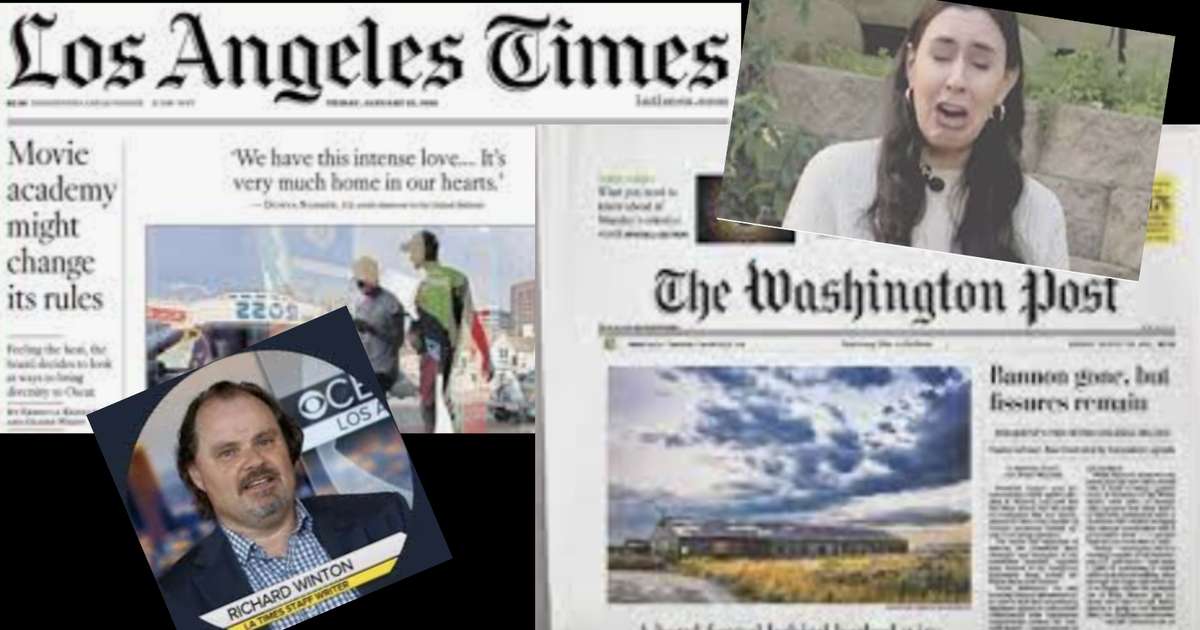 Proving that corporate media is lazy and stupid, a Pulitzer prize-winning reporter at the Los Angeles Times, Richard Winton, reported a Jason Momoa joke meme as real news. “At one point, actor Jason Momoa, star of ‘Aquaman,’ testified via live video in support [of] his co-star Heard,” he wrote. “Without prompting, he said, ‘Hi, Camille,’ to Depp’s high-profile litigator, Camille Vasquez, a rising star in Orange County legal circles who quickly became the star of the trial as much as Depp and Heard.”

I will laugh about this for the rest of my life. Great work, @latimes #JasonMomoa pic.twitter.com/gCbpJlGQil

The problem is that Momoa did not testify at the trial. Winton would have known this if he actually watched the proceeding — which a reporter reporting on it should do. Instead, Winton got his news about the trial from TikTok and social media where this meme was making the rounds. Obviously, this is not real. It’s a “dub” video. This is the definition of fake news.

The Times had to issue an embarrassing correction, which is still visible on the article and says, “an earlier version of this article included a paragraph about Jason Momoa testifying by video at the trial. The ‘Aquaman’ actor did not testify.” This proves that the best reporting coming out of this trial was done by YouTubers and independent media because we actually watched every minute of the trial and reported the facts as they happened. You can go back and watch my live coverage of it on YouTube or any number of great channels that covered the trial accurately.

So if you want accuracy, don’t look to the dinosaur press. Lawyers who attended the trial in the gallery to report on jury reactions like The DUI Guy and Ian Runkle reported that they hardly ever saw any mainstream news media in the courtroom. Yet Big Media wanted to be the ones guiding the narrative of the trial. Left up to them, they would have us believe that Heard is the victim and Depp is the abuser. Anyone who actually watched the trial came to the opposite conclusion.


PJ Media reached out to Winton and asked him how much of the trial he actually watched before reporting on it, but at the time of publishing, he did not respond.

Winton isn’t the only mainstream blue-checked journo just making stuff up about this trial. Taylor Lorenz, the infamous Washington Post reporter who doxxed Libs of Tik Tok for no reason and called it journalism, also reported false facts in her recent article trying to make YouTubers reporting on the trial look bad. Lorenz claimed she had reached out to the YouTubers in question, but they both made statements that she had not.

Related: Taylor Lorenz of the Washington Post is a Terrible Journalist

Um. This says I didn’t respond to requests to comment? I know I’ve gotten a lot of emails over the past two months, but I’ve just double checked for your name, @TaylorLorenz, and I see no email from you.

Also, I didn’t suddenly pivot. I started covering this before trial began. pic.twitter.com/yJzzqS8ggS

A previous version of this story inaccurately attributed to Adam Waldman a quote describing how he contacted some Internet influencers. That quote has been removed,” the Post wrote. “The story has also been amended to note The Post’s attempts to reach Alyte Mazeika and ThatUmbrellaGuy for comment. Previous versions omitted or inaccurately described these attempts.”


That Umbrella Man (TUG) made a video response to the Washington Post article here:

How Did Elvis Die? Cause of Death Explained & Presley Family Response

Lorenz’s subheading on the original article read, “Influencers discover there’s money and clout to be made in covering breaking news” like that’s a bad thing. I guess it’s okay when Washington Post reporters do it, but not for us independent press. When we do it, it’s for “money and clout.” Okay, Taylor. (And for the record, PJ Media reached out to Lorenz to ask for a comment but she didn’t respond.)

The trial offered a potential glimpse into the future of media, where content creators serve as the personalities breaking news to an increasing number of viewers — and, in turn, define the online narrative around major events. Those creators can also bring in major personal profit in the process. In this new landscape, every big news event becomes an opportunity to amass followers, money and clout. And the Depp-Heard trial showed how the creator-driven news ecosystem can influence public opinion based on platform incentives.

Why shouldn’t independent creators profit off bringing news to people in a fun and creative way? They couldn’t possibly be more inaccurate than Taylor Lorenz who misquotes people or Richard Winton who reports memes as facts. In fact, the YouTube content creators Lorenz went after both have been reporting accurately on the trial. That Umbrella Guy was even mentioned in the trial for breaking stories on this case years ago. (During the trial attorney Elaine Bredehoft hilariously referred to him as “The Umbrella Man” and Johnny Depp’s “biggest Twitters,” and I know that because I was watching the entire trial like a good reporter should do.)


Legal Bytes’ Alyte Mazeika is a lawyer who has reported on the trial without having to apologize for reporting false things, unlike the Washington Post and the L.A. Times. Neither has TUG, for that matter. Both creators have reported accurately on the trial, unlike Big Media, and THAT’S why they get the audiences they get and people support them monetarily.

People are sick of Big Media pushing their lies on them. They’re done listening to them. It’s also important to note that both of those YouTube creators have way more viewers than CNN+ did during its short life. The reason for that is that the new media isn’t lying to the public. The truth is weird enough on its own to get hits and views.

Related: Why the Heck Did Amber Heard’s Legal Team Call Her Back to the Stand?

Big Media is desperate to shut down YouTube and other outlets that independent media uses because they’re losing their grip on the narrative and it’s forcing them to actually do work. Big Media reporters are used to going into a courtroom for one hour and finding an angle and reporting it whether it’s factually accurate or not. Now they have to go in there and sit there for eight hours a day for six weeks to keep up with the YouTubers who are dedicating that kind of time in order to get the story right. Big Media hates that.

Rush Limbaugh accurately described them as “drive-by” media because they’re in and out without caring what kind of damage they do to people or the truth when they report the most salacious angle without verifying the truth. They can’t do that anymore because we here in the independent media burn them every time. They hate us for it. Watch out for serious backlash against YouTube for allowing creators to monetize live trials like this.


If they let us continue, they’ll be out of business in a few years.

UPDATE: Taylor Lorenz did not respond to PJ Media but shortly after publishing this article she unleashed a Twitter thread blaming her editor for the lies.

Last Thursday, an incorrect line was added to a story of mine before publishing due to a miscommunication with an editor. I did not write the line and was not aware it was inserted. I asked for it to be removed right after the story went live.

Lorenz also admitted to contacting the two YouTubers AFTER publishing to ask for a comment. She knows that’s not how you do it.

This is why it’s important to support truth-tellers like all of us here at PJ Media. One way you can do that is by becoming a VIP subscriber. PJ Media VIPs get deeper dives, podcasts, and an ad-free experience. VIPs also have a heck of a lot of fun.

You can even use the promo code FAKENEWS to get 25% off! Sign up today!

Tesla Raises Car Prices in US

Article 2 of the Constitution PDF

This $4 Serum Manages Frizz and Adds Shine to Damaged Strands