Physically and emotionally exhausted after their 2-month-old daughter Kinsley needed middle-of-the-night surgery in October 2018 to remove a cyst, James and Lisa Peters of Lindenhurst picked up their 3-year-old, Rylynn, from her grandparents on Sunday. They were back in the hospital the next day with Rylynn for a potentially life-threatening issue.

She had complained of a headache before going to bed. By morning, Rylynn was inconsolable.

“She just woke up and screamed,” remembers Lisa. “I’ve never heard that before.”

James came home from his warehouse job in Kenosha and took Rylynn to the Northwestern Medicine Emergency Center in Grayslake, where a doctor explained an image of her brain.

“There was just a ball,” says James, who felt like screaming after seeing a mass the size of a tennis ball. “I was trying to hold it back for her.” 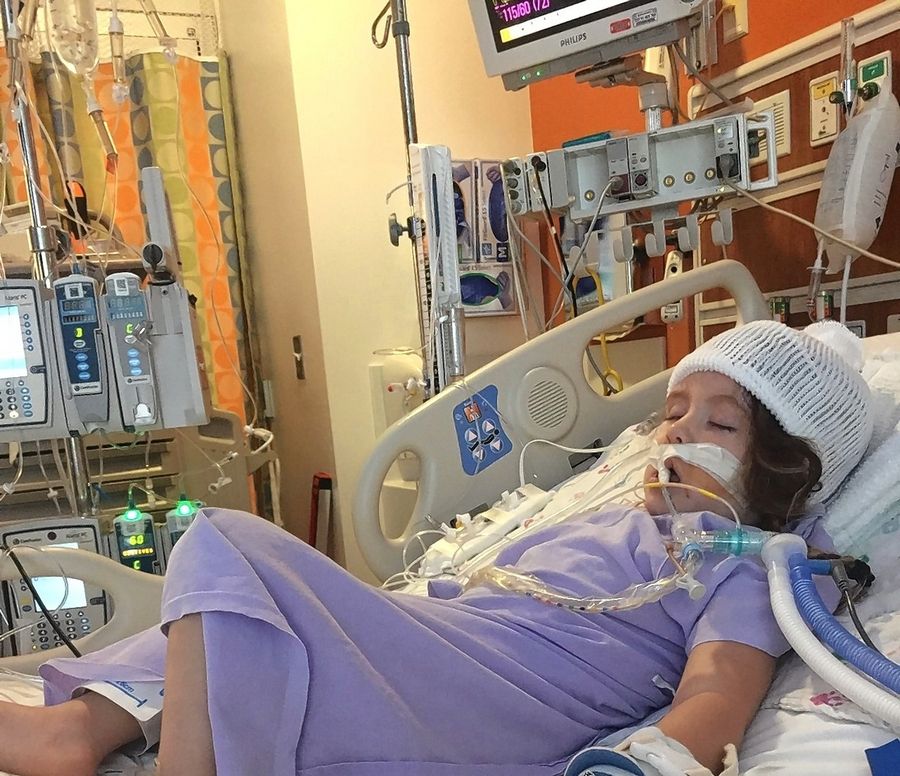 Finding Rylynn Peters’ brain tumor early, after she screamed with a severe headache, was key to a successful surgery at Advocate Children’s Hospital in Park Ridge. Seizures, vomiting, coordination issues, weakness and vision problems also can be signs of a brain tumor.
– Courtesy of Peters family

Finding brain tumors in time is one of the goals of recognizing May as Brain Tumor Awareness Month, says Dr. John Ruge, chief of pediatric neurosurgery at Advocate Children’s Hospital, and one of the surgeons who successfully removed Rylynn’s tumor, which turned out to be benign.

“She was extraordinarily lucky in that she came to our attention so quickly,” Ruge says. “Many children die before diagnosis.”

While most headaches are not caused by brain tumors, unusual pains can be a sign of a brain tumor. Other symptoms can include vomiting, weakness, coordination issues and a variety of vision problems, from a drooping eyelid to double vision, the doctor says.

“There’s a great deal of denial by family members,” Ruge says, noting parents want to assume the issues are caused by something more mundane than a brain tumor, which can be cancerous.

“The most common cause of death in children who have cancer is a brain tumor,” Ruge says. While Rylynn’s juvenile pilocytic astrocytoma tumor was benign, benign tumors “can be just as deadly” as malignant tumors, Ruge says.

The outcome depends on the type of tumor, its location and size, but finding it early leads to better outcomes.

Grandparents Jim and Kathy Peters, who also live in Lindenhurst, helped the family whenever they were needed. Rylynn and James were met at the hospital by Lisa, Lisa’s mom Jill Nolan of Ingleside, and her dad and his wife, Neil and Jan Janota, from Oswego.

“All of us. It was a hot mess. It was scary,” remembers Lisa. “They let me go back, and she was all hooked up to IVs already.” 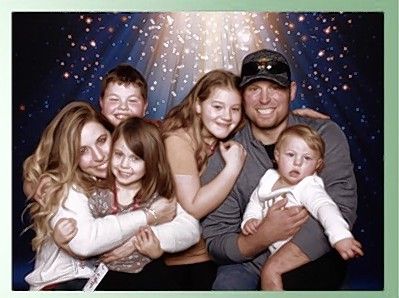 Over a few days in October of 2018, parents James and Lisa Peters of Lindenhurst endured a late-night operation on their baby daughter Kinsley, now 3, and brain surgery of their daughter, Rylynn, now 7. Thanks to an early diagnosis, the girls, and their older siblings, Hailey and Lucas, are all doing well.
– Courtesy of Peters family

Rylynn, now 7 and finishing first grade, doesn’t remember the scary parts. But she does remember the hospital’s playroom, all the presents brought to her by friends and family, and the delicious food.

“Don’t forget the cake” became Rylynn’s mantra, as she requested strawberry cake with every meal.

The Peters’ older children, Hailey, now 13, and Lucas, now 11, got to see Rylynn before surgery, which required the back of her head to be shaved.

“That was her first haircut,” her mom says. “She had Rapunzel hair. One of the nurses French-braided her hair when she was in surgery.”

Another one brought a fish tank into her room. Not only was the staff kind to Rylynn, but the Peters say they met other wonderful families whose children also had brain tumors.

“In a sense, it brought all the families together,” says Lisa, noting that they attended a fall festival and a Christmas party, and still keep in touch. “We all have something in common.”

In the hospital on Halloween, Rylynn was released on Nov. 3 and enjoyed a late and very abbreviated trick-or-treat experience at two houses. Because infection was a major concern, the family mounted an antibacterial dispenser by their front door, which comes in handy now that COVID-19 refuses to disappear. The family received a Make-A-Wish trip to Disney World, where Rylynn got a playdate with Princess Belle.

Now she’s in a cheerleading squad that took first place in a spring competition, rides her bicycle and runs around with her peers. The tumor is just a family memory.

“It’s highly unlikely it will come back,” Ruge says. “We think she’s cured, but we’ll keep an eye on her.”

Rylynn initially got MRIs every three months, then every six months, and now she gets one a year until she turns 10. And baby Kinsley is a healthy 3-year-old.

“I don’t know how we did all this,” the dad says. The parents realize how fortunate they are to have a happy brain tumor story, but they hope Brain Tumor Awareness Month helps other parents.

“Trust your instinct. If you feel something isn’t right, it probably isn’t a tumor, but don’t hesitate to get it checked,” Lisa says. “Life can change in a minute, as we know.”