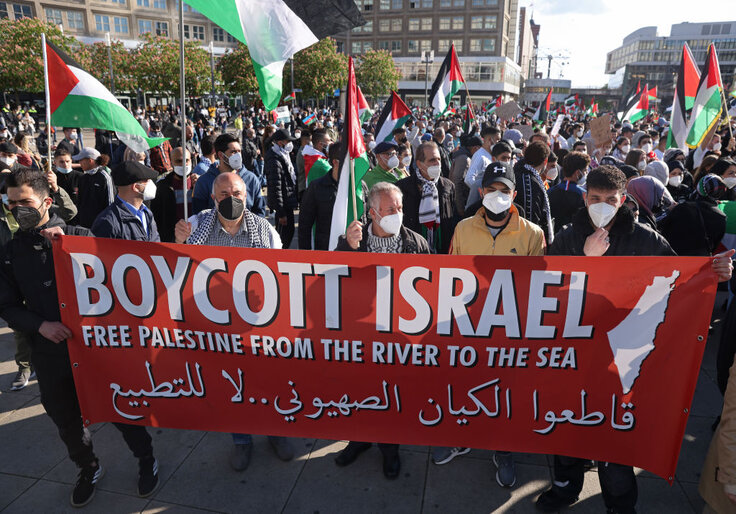 The financial services firm facing accusations that it promotes Israel boycotts relies on research produced by “a leader” in the anti-Semitic Boycott, Divestment, and Sanctions movement (BDS) and other anti-Israel sources, according to an analyst tracking the situation.

The research arm of Morningstar Inc., a firm that advises investors, relies on research produced by a pro-BDS organization called Who Profits, which is known to push Israel boycotts, according to Richard Goldberg, a former U.S. national security official and Middle East expert who recently published an independent analysis on the matter for the Foundation for Defense of Democracies think tank.

Morningstar is already fighting charges that its research arm, Sustainalytics, downgrades companies that help Israel combat terrorism, thereby bolstering the BDS movement’s drive to economically damage the Jewish state. Sustainalytics employees who were interviewed as part of an investigation into anti-Israel bias at the firm indicated they have a close relationship with and rely on research produced by Who Profits, which has been cited by a watchdog organization as one of the leading pro-BDS nonprofit groups. The findings related to Who Profits raise new questions about how deeply Sustainalytics relies on organizations with direct ties to the BDS movement.

“Morningstar’s ratings system uniquely relies on a group that’s at the forefront of the BDS movement to blacklist Israel-connected companies,” said Goldberg.

Who Profits “maintains a public database of businesses that are often targeted in international BDS campaigns,” according to NGO Monitor, a watchdog group that monitors pro-BDS outfits. The reliance on Who Profits and other anti-Israel groups, such as Amnesty International and Human Rights Watch, is raising questions about Morningstar’s commitment to rooting out anti-Israel bias in its ratings products, Goldberg said.

Who Profits “is a leader in BDS efforts against Israeli and foreign companies,” according to NGO Monitor, and was founded “in response to the Palestinian call for boycott[s]” against Israel. The organization is dedicated to “exposing the commercial involvement of Israeli and international corporations in the ongoing Israeli occupation of Palestinian and Syrian lands,” according to information published on its own website.

Goldberg analyzed evidence presented in a 134-page review of Morningstar’s methods conducted by the law firm White & Case that cleared Morningstar of any wrongdoing.

Sustainalytics employees interviewed as part of the White & Case report indicated that Who Profits “was used primarily for background information, and was consistently balanced against other sources.” Others said the relationship is deeper, with Sustainalytics “research analysts often rely[ing] upon Who Profits for what they view as unique, boots on-the-ground research regarding corporate involvement in the region, in part because Who Profits is one of the few organizations that actually operates on the ground in the Israeli/Palestinian conflict areas.”

The White & Case report also found that “communications between Sustainalytics employees and representatives of Who Profits suggest that the relationship between the entities is close, relative to Sustainalytics’ relationships with other organizations.”

Sustainalytics ratings products also rely on information produced by Amnesty International and Human Rights Watch, which have faced accusations of anti-Israel bias and of unfairly labeling Israel as an apartheid state.

The Washington Free Beacon previously reported on concerns that Sustainalytics may place a company on its investment “watchlist” for the “supply of arms” to Israel or other nations involved in conflicts. By downgrading companies that supply the Israel Defense Forces, for instance, Sustainalytics could be relying on metrics that negatively impact Israel more than others.

“As the NGOs leading the BDS movement increasingly try to manipulate CSR firms into advancing their agenda, these firms must be vigilant in vetting these sources,” Steinberg said. “Corporate due diligence is vital to ensure that ratings under the facade of human rights are not based on false claims by ideological activists and organizations.”

A Morningstar spokesman would not address questions related to Sustainalytics’s reliance on Who Profits, but said the company does not in any way endorse or support the BDS movement. Morningstar also said in recent months that it is discontinuing certain services that were found to unfairly target Israel and adjusting others to remove instances of anti-Israel bias.

As Morningstar attempts to distance itself from the BDS movement, a group of leading Jewish organizations raised concerns the reforms do not go far enough. The Jewish Federations of North America, an umbrella organization that represents top Jewish groups across the country, says Sustainalytics’s Environmental, Social, and Governance (ESG) ratings unfairly target Israel. ESG ratings examine a company based on its social values and tend to unfairly target Israel as a result of its conflict with the Palestinians.

The White & Case report “makes clear that built-in bias against Israel infects Sustainalytics’ methodology and sources, and thus, its other ESG ratings products,” the Jewish group wrote in a letter sent to Morningstar’s top executives. “This bias is not only unfair and harmful to Israeli companies and those doing business in and with Israel, but such bias also threatens to tarnish the ESG ratings framework itself.”

“Morningstar should take the opportunity to cleanse its products of all anti-Israel bias and set an example of fairness and reliability for all companies providing ESG ratings, which represent one-third of dollars managed globally,” the organization said, echoing concerns from others in the pro-Israel advocacy world.

FDD’s Goldberg maintains that the biased metrics employed by Sustainalytics could amount to support for the BDS movement and trigger state and federal anti-BDS laws.

“We now have a mountain of evidence that Morningstar’s ESG subsidiary is engaged in a boycott of Israel through its sources and methods,” Goldberg said. “It’s time for states and Congress to intervene.”

Videos from The Recount show what 8 news outlets were covering vs. 1 outlier...

Is the MGK Movie Streaming?