The first public hearing of the Select Committee investigating the January 6 Capitol protests concluded Thursday night, and it utterly failed to live up to the hype. The primetime hearing, broadcast live on every major network except for Fox News Channel (which instead ran the hearing on Fox Business), had been promised to “blow the roof off the House.” All current reports indicate that the roof is still there.

Remember in the Brett Kavanaugh confirmation hearings when Kamala Harris glared at Kavanaugh, asked a question, and then threateningly said, “Be sure about your answer, sir”? Whoa! I thought to myself, she’s got something big on him. What did she have? Absolutely nothing. This hearing felt like an hour-long version of that moment.

After much fanfare, the hearing added little in the way of new information and failed to prove that Donald Trump caused the violence.

“We will be revealing new details showing that the mob on Jan. 6 was the result of a coordinated, multistep effort to overturn the results of the 2020 election and stop the transfer of power from Donald Trump to Joe Biden,” the committee had said in a statement. “Trump was at the center of that effort.”

There were no such revealing details of any import that I could see, and their attempt to show that Trump was “at the center” of some coordinated multistep effort was weak at best. Trump is not above criticism, and many don’t like his actions and words after the 2020 election, but no one yet has found definitive evidence that Trump said anything even close to, ”storm the capitol, folks!”

What the Committee did prove is that A) it was a violent event, B) security was utterly lacking, and C) that the Proud Boys and Oath Keepers were there. All very interesting—and all stuff we already knew from the second Donald Trump impeachment trial.

The hearing started with lengthy, frankly boring speeches by Committee Chairman Benny Thompson and Wyoming Representative Liz Cheney that were full of highfalutin rhetoric and big promises of stunning information to come. I kept thinking if that’s true, can you please get to it already because you two are putting me to sleep. (Somehow Thompson managed to bring up “slavery, the Ku Klux Klan, and lynching” in his speech, though they have absolutely nothing to do with January 6.)

Vice Chair Liz Cheney: “Tonight, I say this to our Republican colleagues who are defending the indefensible: there will come a day when Donald Trump is gone—but your dishonor will remain.”  #January6thCommitteeHearings pic.twitter.com/7tBNkWfdJi

She seems to be on more of a personal crusade than a mission to find out the truth.

Is Your Sentence a Run-On? – About Writing: A Guide

I’m guessing much of the audience had already turned to a different channel by the time the committee started showing the video, which was about 48 minutes into the hearing.

The video is compelling, and as I said there’s plenty of violence and some people who should go to jail, and many have. Although the committee said some of the footage was “never-before-seen by the public,” there didn’t seem to be any that was particularly different than what we’ve already seen, and certainly none that shone new light on the situation. The only thing that jumped out to me was that it seemed the volume level of the background noise of yelling protesters seemed to have been jacked up to 11 for maximum effect. Riots are bad. Got it.

The Committee then delved into evidence alleging that the Oath Keepers and Proud Boys are bad people who planned mayhem that night. Some members of those groups have been already been arrested and tried for “seditious conspiracy” for their roles in the violence, as Thompson strangely points out himself. Why are they relevant now, then? There was no evidence that tied the group to Donald Trump, other than that they generally like him, which doesn’t prove him guilty of anything.

Benny Thompson even threw in the scary-sounding “armed anti-government extremist” description of Oath Keepers members, conveniently leaving out that they were not in fact armed at the Capitol.

What the Committee actually showed was that the Proud Boys, meanwhile, went to the Capitol before Trump had started his speech, apparently undermining their own contention that his speech inspired them to raid the Capitol. 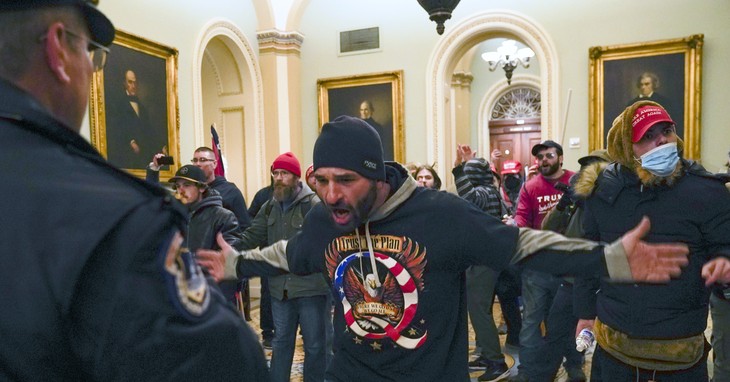 Next came two witnesses, a police officer who was injured at the scene and a videographer who was shooting a documentary that day. The police officer’s story was especially moving—she was knocked unconscious when pushed over by a mob of people—but did nothing to advance the claims that a Trump conspiracy was behind all this. Not surprisingly, there was no mention of Ashli Babbitt, the Air Force veteran who was shot and killed by a Capitol police officer.

The committee continued with more evidence—evidence that mostly showed that a riot is a scary place to be. Nowhere was there a smoking gun, a new “blockbuster” piece of evidence, or a stunning new narrative.

The hearing was a disaster for Democrats, and it’s hard to see a huge audience that wants to watch seven more hearings. Those hearings won’t even be primetime, and won’t get the same wall-to-wall network coverage. They’ll probably be little noticed by anyone except Adam Schiff groupies.

Wednesday night, in a preview piece about this hearing, I wrote that the Committee had hyped this broadcast to such a degree that if they didn’t produce something spectacular, they would be left with eggs on their faces. They’re looking for a mop about now.

‘What Is A Woman?’ Ads Pop Up At Pro-Abortion Rights And Women’s Marches Across...