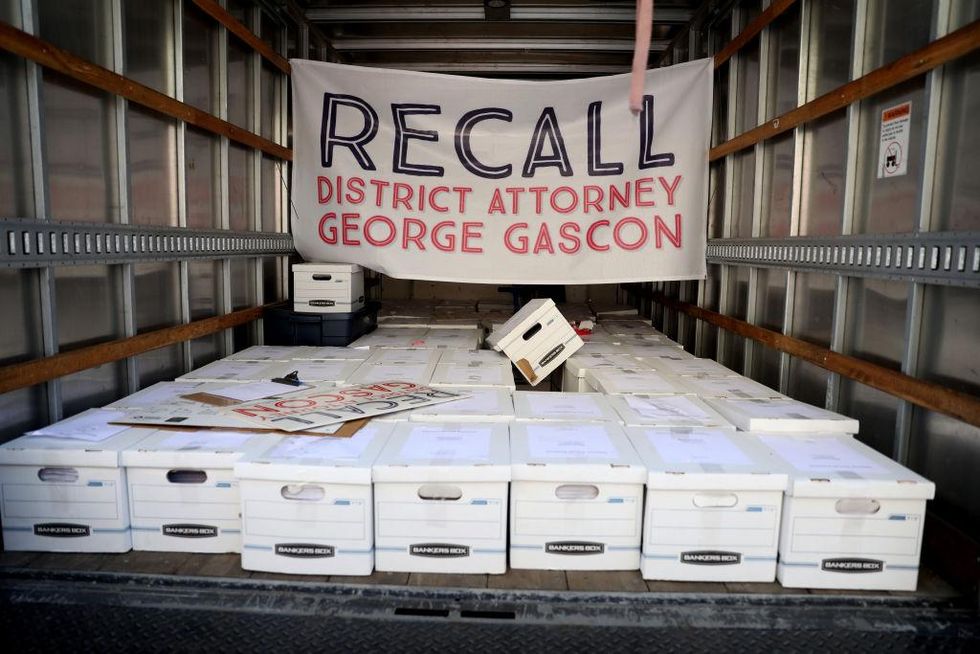 In 2018, when even conservatives bought into the de-incarceration agenda of “criminal justice reform,” I lamented to crime expert Heather Mac Donald in a conversation, “What are we going to do about the tsunami of jailbreak bills enjoying bipartisan support?” “It’s going to have to get worse before it gets better,” she replied. “The country has forgotten what it was like before the Giuliani days of tough-on-crime policies, and they will need a reminder.” Well, it appears that the people have now gotten a stark reminder of what ubiquitous crime looks like. The question is whether Republican politicians have finally learned their lesson.

After San Francisco voters tossed out pro-criminal Soros DA Chesa Boudin in a stunning recall election last month, it appears that Los Angeles voters are ready for a repeat performance against DA George Gascón. After turning San Francisco into the needle and homeless capital of the country during his stint as DA last decade, Gascon took his criminal road show down south to L.A. in 2020 and promised “the lowest level of intervention for the criminal justice system” if elected. Well, he did not disappoint. He did to L.A. what Boudin did to San Francisco, as crime skyrocketed commensurate with this criminal release policies. Now he appears to be suffering the same fate as his San Franciscan comrade.

On Monday, the organizers of the recall campaign against Gascon turned in to the Los Angeles Registrar-Recorder/County Clerk’s office 715,833 signatures for the recall petition. In order to trigger a recall election, 566,857 valid signatures are required, so the campaign looks like it was a smashing success. The clerk’s office has until August 17 to certify the petitions, and then the recall election will likely be held concurrent with the general election in November.

These results in America’s most liberal cities are astounding and demonstrate that crime transcends ideological divisions. Rather than running away from tough-on-crime policies for over a decade, Republicans should have embraced their Reagan roots and stood with victims of crime.

Gascon instituted numerous dangerous pro-criminal policies that ensured repeat violent offenders avoided most sentencing enhancements, violent juveniles got off with a slap on the wrist, and sentences for murderers were reopened. The recall campaign reached its crescendo last month when two El Monte Police officers – Joseph Santana and Michael Paredes – were allegedly murdered by a repeat violent offender who would have been behind bars but benefited from Gascon’s eschewing of sentencing enhancements. The alleged murderer, Justin Flores, was a gang member with multiple priors. Because of his record, he would have been eligible for a three-year sentence on a 2021 conviction for drug and gun charges, but thanks to Gascon’s policies, he was out after 10 days.

Things are so bad in L.A. now that 7-11 stores are being encouraged to close due to shootings and robberies, even on their celebrated July 11 promotional day.

Bizarrely, rather than hit Democrats for releasing violent gun felons, Republicans decided last month to work with them on red-flag laws to circumvent due process. It appears that L.A. and San Francisco voters understand the crime issue better than elite Republicans, most of whom never have to live in the neighborhoods plagued by “criminal justice reform.” In general, progressive DA and sheriff candidates were defeated throughout California in last month’s primaries.

It has become self-evident that most violent crime could be stopped if we had a true “three strikes and you’re out” law for repeat violent offenders. A remarkable new analysis published by the Maryland Public Policy Institute reveals that most of the recent murder suspects in Baltimore, one of America’s murder capitals, had recent convictions for serious offenses but were out of prison to commit the new crime only because they were released before the statutory sentencing timeframe.

Researchers analyzed 110 homicide suspects between January 2019 and July 2020 and found that 77 had been convicted for a serious crime since 2015 and 90 had committed serious offenses at some point in their careers of crime. “Of those 77 previously convicted, 61 (79%) of them faced statutory jail terms that should have kept them in prison beyond the date that they committed the subsequent alleged homicide,” notes the MPPI.

The report also profiles five homicide defendants who allegedly killed within months of their prior conviction and sentencing. “One suspect, James Dunbar, whose homicide case is still pending, was convicted of a handgun charge, and released for time served less than three months before he is accused of killing a man in 2019. Another repeat drug and gun offender was convicted of dealing drugs and violating his probation six months before he allegedly shot and killed someone in 2020.”

It turns out that 59% of the murder suspects had previously committed a weapons crime or used a firearm in another offense. Thus, for a city that banned right to carry until the recent Supreme Court ruling, they sure didn’t mind violent criminals carrying weapons.

Republicans have mistakenly joined with Democrats in pushing for de-incarceration even as they mindlessly chant “back the blue.” But police are meaningless if we refuse to lock up repeat violent offenders. We need more than election-year talking points; we need commitments to increase – yes, increase – the number of criminals in prison. Three strikes and you’re out should mean you are off the streets forever. Sure, it will land more people in jail, but it would stop most of the murders, robberies, and carjackings. That is what most average Americans care about most.

The Doobies Are Just Alright

Here’s a tweet about a well-regulated militia and the ‘AR-15 automatic bullet machine’ –...

Reagan at Christmas: To ‘Millions of Us, Jesus Is Much More, He Is Divine’