As Rep. Liz Cheney continues her role as chief spokesperson for the January 6 Select Committee, her hopes for reelection in Wyoming are fading. The Republican primary in the state is on August 16, 2022, and Cheney has a serious primary challenger. Harriet Hageman is an attorney who prosecuted cases related to water and natural resources. President Trump’s team recruited her to run against Cheney, and he endorsed her. In 2014, Hageman was part of the leadership team on Cheney’s campaign for the Senate. The Cheney and Hageman families are longtime allies.

Times change and Hageman has run an aggressive campaign. A Club for Growth poll in late May showed a 30-point lead for Hageman among Republican primary voters. According to Politico, the polling confirmed data that Club for Growth collected in April 2021, when 52% of GOP primary voters said they would vote against Cheney no matter who ran against her. Trump won the state in 2020 by 16 points.

Needless to say, Cheney’s tedious droning during the televised January 6 committee hearings is not increasing her popularity among Republican primary voters in Wyoming. It is becoming increasingly evident she has disdain for her own voters. So how is a career politician who has enriched herself for years by sending our sons and daughters overseas to fight in pointless foreign wars supposed to maintain power and relevance? Apparently, rather than exit stage left as the current political environment and Cheney’s poll numbers suggest, she has decided to implore her political opposition for a boost.

According to The New York Times, Cheney’s campaign in Wyoming is sending mailers to Democrats instructing them how to change their party affiliation so they can vote for her in the primary. The Democrats also have a primary with three candidates. It appears Cheney is hoping for a rematch with her 2020 Democrat challenger, Lynnette Grey Bull. Cheney won that election with 68.6% of the vote. But now, she will need Wyoming Democrats to help her win. Irony, thy name is Liz.

Voice actress suggests Biden set up an AR-15 buyback program and send them all to Ukraine – twitchy.com

“How can I change my party affiliation to register as a Republican so I can vote for Liz?” the flier asks. In Wyoming, you can register to vote in the primary up to 14 days before the date. It is possible to change your party affiliation when you arrive to vote or request your ballot if you are already registered: 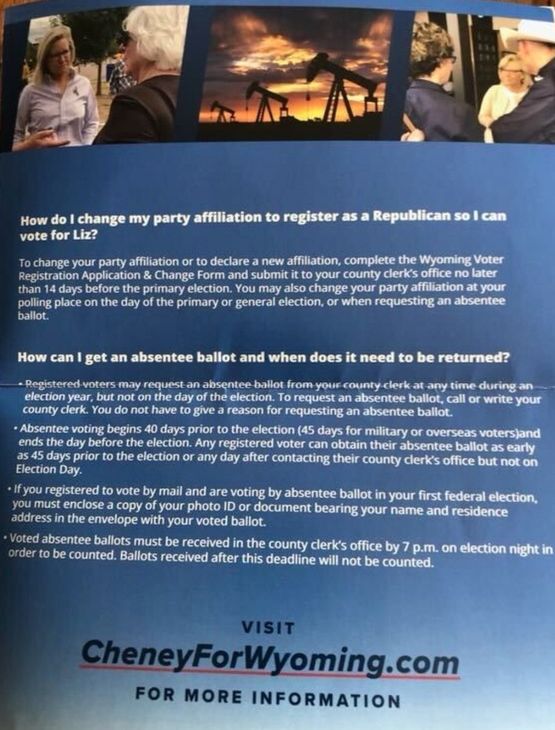 The campaign is even encouraging people to vote by mail. Now, it is not unheard of for Democrats, in order to swing an open primary, to select the candidate they believe is easiest to defeat. There are allegations that Democrats recently did this in Georgia to ensure incumbent Secretary of State Brad Raffensperger won his primary. Raffensperger is unpopular with Trump supporters. It is unclear whether expecting voters to change their registration to vote in a closed primary is a winning strategy.

Here is a better idea: Cheney can change her party affiliation. She defeated the likely Democratic candidate in the last election. She can run against Grey Bull again in the primary and then face Hageman in the general election. That would be more honest. But honesty isn’t Cheney’s strong suit lately. And if she thinks the strange new respect she gets from MSNBC will translate into Democrats helping her maintain power, she might just be surprised on August 15.