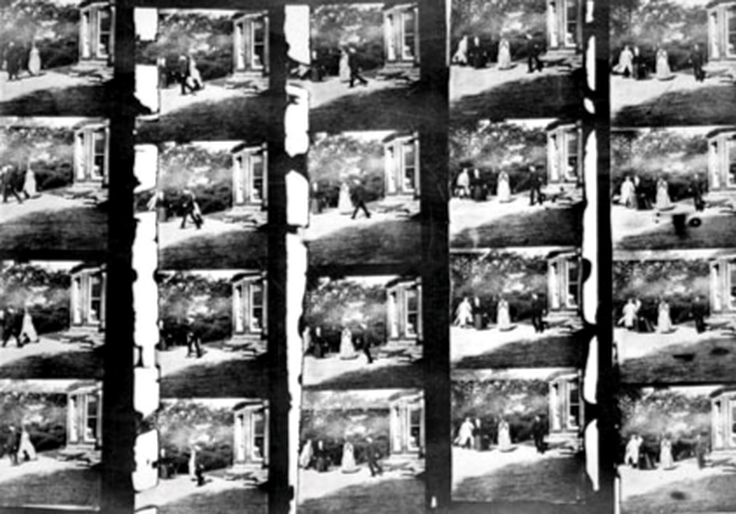 When Louis Le Prince vanished in 1890, his legacy disappeared with him.

Le Prince traveled from Dijon to Paris, France, on September 16 after visiting his brother. From Paris, Louis would sail home to his wife Lizzie and their five children in New York. Louis was anxious to return. The artist had been perfecting the world’s first filmmaking device and promised the family a special showing of the finished product. When Louis didn’t show, Lizzie and her daughter checked ship passenger logs hoping that Louis missed his train and would somehow find his way back to New York. He never did—and his family spent months agonizing over Louis’s mysterious disappearance.

But in 1891, Lizzie developed a theory after reading a New York Sun headline: “The Kinetograph. Edison’s Latest and Most Surprising Device. Pure Motion Recorded and Reproduced.” Thomas Edison, Lizzie’s main suspect and the world’s most famous inventor, had invented the motion picture—years after Louis and months after his disappearance. “I remember seeing the pictures,” a friend of Louis’s wrote to Lizzie at the time. “I had grasped the manner of working the apparatus enough to know that on reading Edison’s account of the Kinetoscope in the papers of May 1891, that it was an infringement on Le Prince’s machine.”

Patent law forbade the Le Prince family from contesting Edison’s “invention” since Louis was missing, not dead. The family waited seven years until he was legally declared dead to gain control of Louis’s patents. By then, Edison’s reputation as the inventor of film was solidified.

If Edison is the father of moving film, Louis is its godfather—the original mastermind behind the industry. In his investigative history The Man Who Invented Motion Pictures, author and filmmaker Paul Fischer rekindles Louis’s legacy and speculates about his disappearance.

“Why did Edison announce the invention Louis Le Prince had been working on for the past five years?” Fischer asks. Inventors had experimented with moving pictures to a degree, though none as passionately, or effectively, as Louis. For all other competitors, and indeed for Edison, motion pictures were mere profit-drivers. Edison wanted to make history—Louis wanted to capture it.

As a child, Louis was introduced to the art of photography through his father’s friend Jacques Daguerre, inventor of daguerreotype photography. Daguerre taught young Louis to be “bent of thought”—philosophizing that “the impossible is merely not yet visible.” This inspired Louis to create a camera that “did not have to make time stop, but could capture life as it unfolded.”

After moving to Leeds, England, Louis married Sarah Elizabeth Whitley. The two founded the Leeds Technical School of Art and were lauded for their brilliant ceramic and glass work. In 1880, Louis began to experiment with combination printing on porcelain products. Such retouching efforts could erase any undesirable details by blending and imprinting two images together: the first FaceTune. A weary Louis was in his studio one evening when a “glass plate and paper print slipped in his hands, and to his strained, fatigued eyes the person affixed on both layers suddenly ‘gave a distinct impression of movement'”—as if the photograph had come to life.

After a successful business trip to New York, Louis moved his growing family to America, where he and Lizzie took positions at the Institute for the Deaf. Louis conducted most of his film experiments in the institute’s workshop.

It wasn’t long before Louis developed the motion picture. His five children enjoyed the popular toy the magic lantern, an image projector that displayed hand-painted slides. Watching his children marvel over lifelike Chinese fireworks, Louis had an idea of his own: a device that could capture more than a stagnant image, but a moment in history.

Years of trial begot success. Louis submitted his patent for “certain new and useful Improvements in the Method of and Apparatus for Producing Animated Pictures of Natural Scenery and Life on Glass” in 1886, and the patent was approved two years later. While he waited to claim his invention, Louis improved on the device and predicted what might entertain the masses. He dreamt of filming P.T. Barnum’s circus, New York scenery, and sporting events, and even drew plans for a large projecting room with amphitheater-like seating—the world’s first movie theater. Speaking in 1919, Louis’s patent lawyer said that “almost everything one sees on the screen today he vividly narrated to me more than thirty-three years ago.”

By 1887, Louis was the only man in the industry to patent moving picture technology. He had competitors: Leland Stanford’s prolific photographer Eadweard Muybridge, the first man to photograph motion; Étienne-Jules Marey, an expert in analyzing and capturing series of still photographs; Charles-Émile Reynaud, inventor of the animation device the praxinoscope; and Ottomar Anschütz, who improved on technical models and shutter speeds. The famous Lumière brothers, directors of the first short film, were nearly bankrupt and in their early 20s, years away from developing cinema. The race to motion pictures was competitive—but it wasn’t close.

Edison, having met with Muybridge briefly and observing the excitement around photography and motion pictures, sniffed out profit in the film industry. He pushed out innovation after innovation—even when the innovations failed, which many did. Edison was a brilliant mind, Fischer acknowledges, though he was a better developer than he was an inventor.

By the time Edison patented motion picture technology, Louis had filmed the first movie: the Roundhay Garden Scene. The surviving footage is miraculous. Louis’s in-laws, his eldest son Adolphe, and a family friend pranced around the grass, walking in long-legged strides, marching back and forth. “He seems,” Fischer writes, “to have asked them, simply, to move.” It’s fitting that Louis culminated years of trial and error in such a mundane scene: “What better way to demonstrate the novelty of his camera and projector than the taking of real, daily life—of normal people, doing normal things, at home—the kind of sequences no one bothered to commit to a magic lantern or Zoopraxiscope,” Fischer marvels.

The workhorse might still have been toiling with his machine instead of on a train in France in September 1890. “Louis, who had earlier in the year told his wife he was too preoccupied with experimenting to indulge social calls, accepted—a further sign, Lizzie insisted, that work on the camera and projector was complete,” Fischer writes. Or, embracing Lizzie’s sinister fears, without motion picture, Edison would have no reason to want Louis gone (though there’s no hard evidence tying Edison to Le Prince’s disappearance).

Louis’s body and luggage were never found, though Adolphe spent his youth searching for his father. When that proved pointless, he fought to preserve the filmmaker’s legacy. After a “farce” 1901 court decision that denied Louis’s original patents and framed Edison as the first filmmaker, Adolphe retreated to his family house and shot himself in the head.

Had a camera filmed Louis as he entered the train station or stepped on to the platform, we might have a better picture of what happened to the forgotten filmmaker. For now, we can only give thanks to the man who made possible such technology.

The Man Who Invented Motion Pictures: A True Tale of Obsession, Murder, and the Movies
by Paul Fischer
Simon & Schuster, 416 pp., $28.99

Online US Constitution Quiz: Requirements and Qualifications To Become the US President