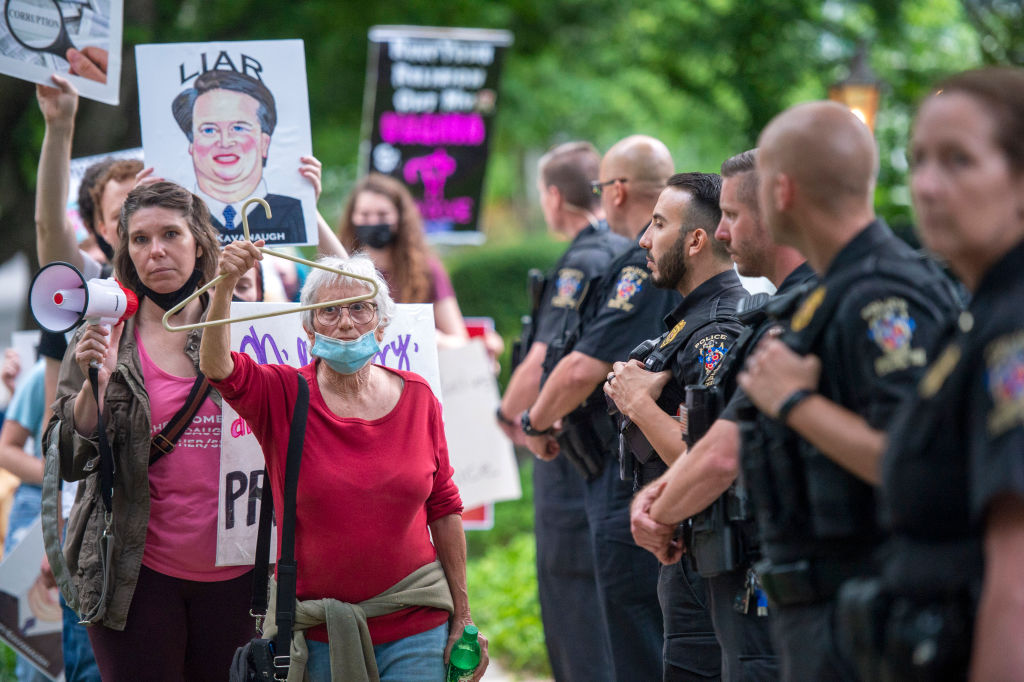 If the leak of Roe v. Wade’s demise was a bang, the left’s commitment to terrorizing Supreme Court justices in their homes went out with a whimper.

The Washington Free Beacon on Friday visited the homes of several conservative justices. Although an armed man had attempted to assassinate Brett Kavanaugh weeks prior, the mood on his Chevy Chase street was tranquil absent an elderly protester and her followers. Police watched as a group of half a dozen protesters, many of them wearing surgical masks, chalked pro-choice slogans on the sidewalk and marched back and forth with signs. The most militant of the bunch was an elderly woman brandishing a coat hanger—plastic, not metal—who led the protesters in chants of “Liar, liar, pants on fire.”

At one point, the cops ordered Chinese food.

The protests outside Justice Clarence Thomas’s Virginia home were not much different. Rather than acting enraged, most of the attendees —overwhelmingly white—banged on drums and sang what sounded like African-American spirituals. A mustachioed neighbor of Thomas’s observed nearby, cigar in mouth.

Members of the media appeared to outnumber the protesters at both justices’ homes.

The muted protests are a stark departure from the fulminations that followed the Dobbs leak and led to concerns about the justice’s safety. The Department of Homeland Security released an internal memo in May warning that left-wing extremists may be plotting assassinations against conservative jurists and members of the clergy. Supreme Court Justices Kavanaugh and Alito saw heated protests outside of their home for days.

But with outrage over the decision diffused over months—and with no one in the D.C.-area affected by the ruling—the “Night of Rage” promised by the pro-abortion group Ruth Sent Us never materialized. That relative calm raises questions about how much the end of Roe v. Wade will energize Democratic voters in November.

When It Comes to Post-Pandemic Economic Recovery, Red States Are Leading the Way – PJ Media

It also contrasts sharply with the extreme violence following the death of George Floyd, which destroyed myriad storefronts and resulted in hundreds of arrests in Washington, D.C., alone. Although the protests outside the Supreme Court were more rowdy—several members of the left-wing terror group Antifa kicked over traffic cones and burned a “Don’t Tread on Me” flag—law enforcement kept the disorder contained.

At the start of the protests outside the Court, activists squabbled over the propriety of letting a man speak about the need for abortion access. “Let a woman speak,” one attendee yelled before the man with the megaphone replied “I’m wrapping up.”

There were no protests around Justice Amy Coney Barrett’s home. The most confrontational sign in sight was an “Arrest Fauci” t-shirt, worn by a middle-aged woman walking her terrier.