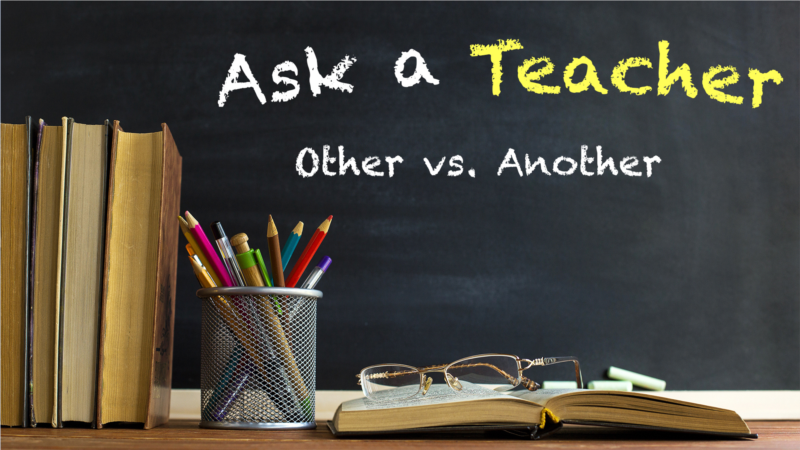 Hello! This week on Ask a Teacher, we will answer a question from Mahad, a reader of our website, about the difference between “other” and “another.”

I would like to know the difference between “another” and “other.”

Thank you for writing to us. Although we have written about the subject for Everyday Grammar, we will take a closer look at the differences between “other” and “another” in this week’s Ask a Teacher.

Let us discuss “other” as a determiner and as an adjective. An adjective describes a noun. Determiners also give information about nouns, but they describe things like how many or whose.

The word “other” can have many meanings such as “not included” or “remaining,” “different” or “distinct,” “additional,” and “different kinds of.”

And we use “other” with plural nouns and nouns that cannot be counted (noncount nouns). “Other” is also used to describe nouns in a general way.

There are other sports to watch on TV if football isn’t on.

In this example, “other” means “different kinds of.” So, instead of watching football, we can watch a different sport.

Is there other wood for the fire? This wood is damp.

The word “wood,” in this example, is a noncount noun. Here “other” means “different” wood, such as dry wood.

Other as an adjective

If we use “other” before some kinds of nouns, we must use another determiner before it, like “the.”

The word “the” makes the sentence more specific.

“The other” can be used with plural countable nouns, too.

My dog played with the other dog at the park.

My dog played with the other dogs at the park

(The other remaining dogs)

In these sentences, “other” is used as an adjective because “the” is used as the determiner.

Risks abound for both parties in uncertain Senate races

“Another” is a determiner. It is only used with singular nouns. It does not refer to anything or anyone specific.

It can mean “one more,” “an additional one of the same kind,” or “different from the first.”

Let’s look at some examples:

My dog played with another dog of her breed at the park.

In this example, “another” means “an additional one of the same kind.”

The sport of soccer has another name in many other countries. They call it football.

In this sentence, “another” means “one more.”

(An additional or one more name for soccer)

Is there another kind of music that you play besides classical?

And here, “another” means “different from the first.”

(A different kind of music than classical music)

The biggest difference between these two words is that “another” is always singular and does not describe anything specific. “Other” is used for plural and noncount nouns that are general. We only use “the other” to refer to specific nouns.

Please let us know if these examples and explanations have helped you, Mahad.

What question do you have about American English? Send us an email at learningenglish@voanews.com

And that’s Ask a Teacher.

Do you have a question for the teacher? We want to hear from you. Write to us in the Comments Section.

Words in This Story

Planned Parenthood Pushes Back Against Roe’s Demise by Pushing Pills