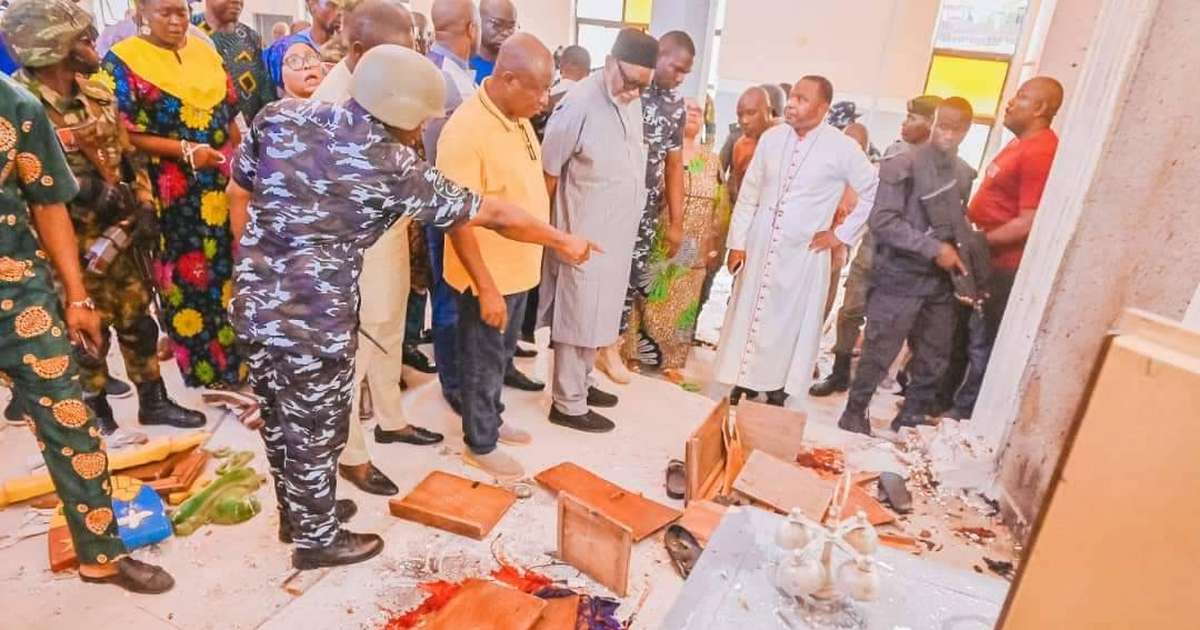 Reports coming out of Nigeria say that dozens of worshippers including women and children were killed in an attack on St. Francis Catholic Church, in the southwestern Nigerian state of Ondo. The attackers targeted parishioners who were celebrating Pentecost Sunday, with terrorists firing weapons into the congregation and detonating explosives. The terrorists also abducted a priest.

“Only fiends from the nether region could have conceived and carried out such dastardly act,” said Nigerian President Muhammadu Buhari, according to a spokesman. He called the attack “heinous” and promised, “No matter what, this country shall never give in to evil and wicked people, and darkness will never overcome light. Nigeria will eventually win.” Buhari was elected to office on a platform of making Nigeria more secure.

Related: Why, for the UN, Is One Mosque Massacre So Much Worse than Countless Church Massacres?

The New York Post reports that “It was not immediately clear who was behind the attack on the church. While much of Nigeria has struggled with security issues, Ondo is widely known as one of Nigeria’s most peaceful states.”

Catholic Church head Pope Francis issued a statement via the Vatican press office: “The pope has learned of the attack on the church in Ondo, Nigeria and the deaths of dozens of worshippers, many children, during the celebration of Pentecost. While the details are being clarified, Pope Francis prays for the victims and the country, painfully affected at a time of celebration, and entrusts them both to the Lord so that he may send his spirit to console them.”

I am deeply saddened by the unprovoked attack and killing of innocent people of Owo, worshiping at the St. Francis Catholic Church, Today.

The vile & satanic attack is a calculated assault on the peace-loving people of Owo Kingdom who have enjoyed relative peace over the years. pic.twitter.com/30fMbfnOxc

I am deeply saddened by the unprovoked attack and killing of innocent people of Owo, worshiping at the St. Francis Catholic Church, Today.

The vile & satanic attack is a calculated assault on the peace-loving people of Owo Kingdom who have enjoyed relative peace over the years.

It is a black Sunday in Owo. Our hearts are heavy. Our peace and tranquility have been attacked by the enemies of the people. This is a personal loss, an attack on our dear state.

I have spoken to the Bishop of the Catholic Diocese of Ondo, Most Reverend Jude Arogundade, who is presently on his way to Owo. Similarly, I have had to cut short my party’s national assignment in Abuja and visit Owo immediately.

This is an unexpected development. I am shocked to say the least. Nevertheless, We shall commit every available resource to hunt down these assailants and make them pay. We shall never bow to the machinations of heartless elements in our resolves to rid our state of criminals.

I commiserate with my people in Owo, particularly families of the those who lost their lives to this ugly and unfortunate attack.

I extend my condolences to Olowo of Owo, Oba Gbadegesin Ogunoye as well as the Catholic Church.

Akeredolu urged people to “remain calm and vigilant. Do not take laws into your hands.” He issued assurances, adding, “I have spoken to the heads of the security agencies. I have equally been assured that security operatives would be deployed to monitor and restore normalcy to Owo kingdom.” Akeredolu later visited the scene.

I was at the scene of the terror attack on innocent worshipers at St. Francis Catholic Church in Owo, today. I also visited the hospitals where survivors of the attack are receiving medical attention.

The attack was the most dastardly act that could happen in any society. pic.twitter.com/I8xv80CTfL

Prayers are encouraged for the parishioners, their families, the church, and the entire nation as we wait to find out more about the reprehensible attack.