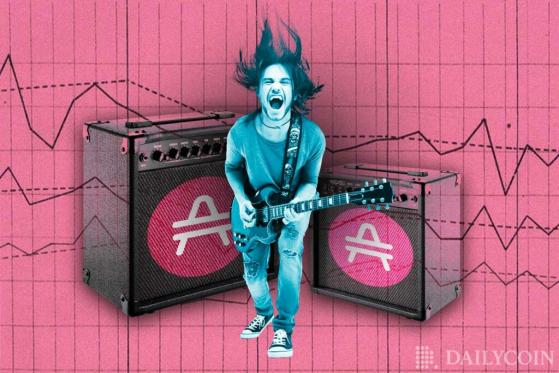 AMP, the native cryptocurrency of the Amp blockchain, was introduced in 2020 as a collateralized token designed to speed up transactions for a wide variety of asset-related use cases.

Amp can be used to facilitate digital payments, fiat currency, loan distributions, and proceeds from property sales. Amp also supports cryptocurrency networks, including the two largest in the world – and .

The Amp team is also behind the Flexa Network, an open-source digital payment processing network. With Flexa, users can quickly and irreversibly secure transactions for a wide variety of asset-related use cases.

Amp offers a versatile interface that supports verifiable collateralization for up to 25 digital assets through a system of collateral partitions and collateral managers.

While cryptocurrencies are struggling to maintain their gains in the choppy market, Amp (AMP) has been in blistering hot form. AMP has gained more than 43% over the last 48 hours, the best of any top 100 crypto ranked by market cap.

June was a busy month for Amp and Flexa as they continued to expand their pure-digital payments solutions to more merchants and developers. Flexa announced its solution had been integrated by Chipotle.

Flexa also debuted its new product, Flexa payments, at Consensus 2022 in Austin, Texas. At the launch, Flexa was used to power the spending of the DESK token across the Consensus festival.

Outside the Consensus festival, the new Flexa Payments product makes it easier than ever for any app to spend via Flexa. A week after it launched, Flexa announced that ten apps had adopted the Spend SDK – a complete suite of Flexa-powered spending features.

In addition, Flexa leads the pack of green blockchain projects by balancing its carbon emissions on all blockchain and operating activities with high-quality, verified carbon offsets to maintain a completely carbon-negative network.

The Case for Expanding the Legal Definition of “Refugee”

Amp is often compared to other crypto payment processors like (XRP) as a payment network. However, supporting multiple asset classes has made the Amp community more fond of the project than any other.

The crypto tax accountant, @Bitbookkeepers, wrote this about Amp.

I’m going to go ahead and say it. #AMP is bigger than #XRP

The recent price surge has also brought out newfound belief in the future of the project. As AMP pumped, Oscar Ramos wrote;

Amanda predicts that AMP will rise even further, encouraging people to Hodl. She writes;

The INCREDIBLE gain yesterday with #AMP was just a small uptick, in the scheme of things. #hodl AMP. #CryptoMarket #binance #Coinbase #CMC pic.twitter.com/fvEi9vrINL

Why You Should Care

There is a lot to like about AMP and the Flexa payments platform it powers. Helping users mitigate risk by granting them easy access to financial products by leveraging their crypto assets, the use cases of Amp and its AMP token have only been predicted to rise.

Here’s a tweet about a well-regulated militia and the ‘AR-15 automatic bullet machine’ – twitchy.com

Police arrest Texas man for allegedly leaving his 5 children in a hot car...