The crack professional journalists at Reuters have tweeted out an image of Ukrainian soldiers wielding paintball guns in a story about the current war between Ukraine and Russia.

“Ukraine says it has repelled Russian incursion in Sumy region” reads the tweet, which is accompanied by an image in which the soldiers are clearly wielding paintball guns and wearing paintball masks. 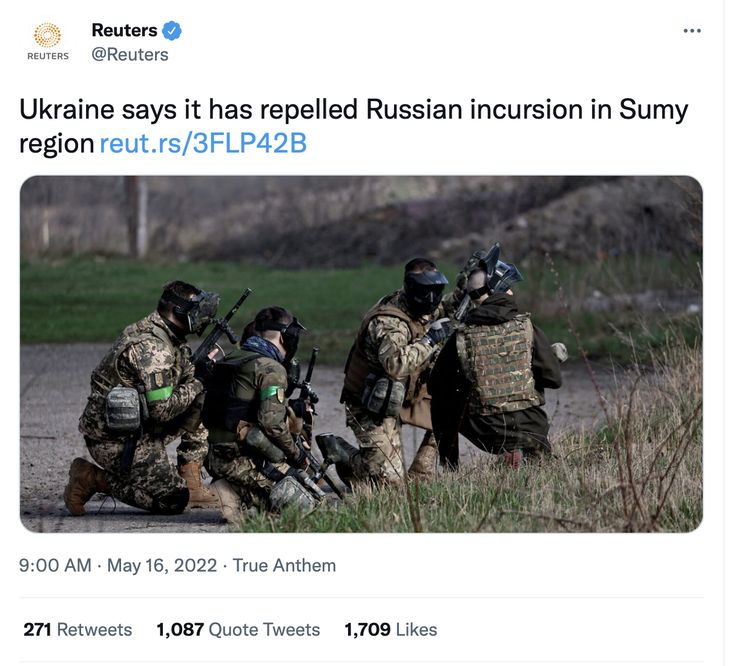 The linked Reuter’s article features a different image, which is captioned:

Members of the territorial defence force attend a training simulation for raiding a building occupied by enemy forces as they prepare for new assault, amid Russia’s invasion of Ukraine, at an abandoned building in Sumy, Ukraine April 15, 2022. Picture taken April 15, 2022. REUTERS/Zohra Bensemra

Related: CNN to Stop Broadcasting in Russia, and the Reason Is Hilarious.

It’s one thing to use media library news images. Smaller news organizations such as PJ Media, which don’t have the resources to send reporters to cover most of their stories, routinely rely on file photos. But we also know better than to make ourselves look stupid by posting toy guns when reporting on an actual warfare situation.


Congress is expected to authorize $40 billion in Ukraine funding this week. Questions have already arisen about whether there will be any accountability for where this latest inflation-boosting deficit spending will wind up. Seeing our media elites — upon whom many of our political elites rely for their information — flub the most basic situational knowledge doesn’t do much to inspire confidence in the entire operation.