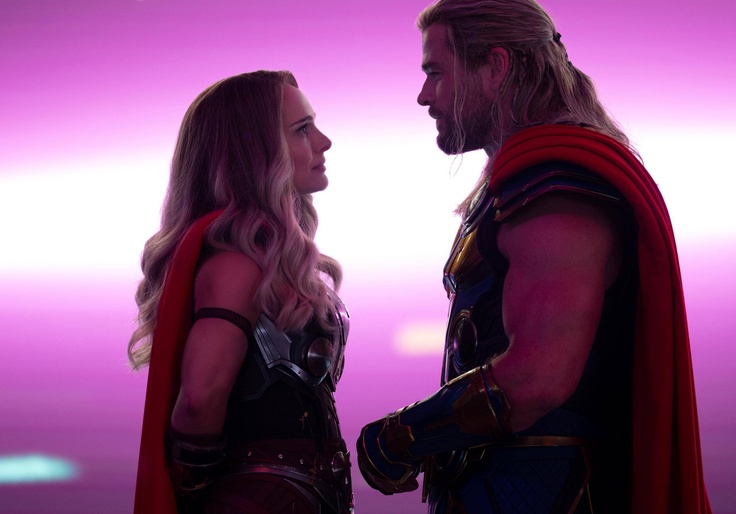 When it’s really on fire, Thor: Love and Thunder is a wondrous work of sustained, exhilarating silliness. Now, it’s not as silly or as exhilarating as its glorious predecessor, Thor: Ragnarok, which is to comic superhero movies what Singin’ in the Rain is to musicals. But it’s pretty damn good, all things considered. Co-writer/director Taika Waititi, who made Ragnarok as well as Jojo Rabbit and is probably the most energetic and singular creative force working in popular culture right now, stuffs the new movie with jokes, asides, slapstick, visual puns, and as many comic references to cultural icons as a Bugs Bunny cartoon.

The inspired Hemsworth has now completed the about-face that began with Ragnarok and continued in the final Avengers movies, turning Thor from an earnest man-mountain into Buzz Lightyear with a hammer—noble and fearless and vain and comically clueless all at the same time. (I mean the funny Buzz Lightyear from the Toy Story movies, not the bad, not-funny one in Lightyear.) Hemsworth even pulls off a series of bits about Thor’s complicated emotional relationship with the weapon he made for himself in Avengers: Endgame, the Stormbreaker, and each hits the bullseye. Some of Waititi’s fanciful japes don’t work, but it doesn’t matter, because there’s always another one about to come in from the wings.

As this is a Marvel thing, there has to be a plot about a villain who is on a quest to destroy things and take over everything. This time it’s Christian Bale, whose makeup is, bizarrely, an almost exact likeness of Jared Leto’s getup when he played the Joker in the dreadful 2016 DC movie Suicide Squad. (I’m not talking about The Suicide Squad. I’m talking about Suicide Squad. These are two different movies. Made five years apart. I’m not kidding.)

What Christian Bale’s character wants to do is kill gods. In the world of Thor: Love and Thunder, all the gods from every ethnic and religious pagan tradition are alive and well and hanging out with each other in a place called Omnipotent City. And you know what? Bale is right. The gods kind of deserve to die. They’re selfish and thoughtless and mean, and in the case of Zeus, act like the grouchy proprietor of a successful Greek diner in New Jersey when you object that your coffee is cold.

Zeus is here played by an unrecognizable Russell Crowe, who not only does a flawless Greek-diner accent but is so hilarious it breaks your heart to think of all the romantic comedies he might have made back when he was young and handsome and before everyone discovered he was actually a complete violent lunatic who threw phones at people’s heads and thereby trashed his own career. His five minutes on screen are alone worth the price of admission.

Thor comes to hate Zeus and kind of goes all Bale on him. The movie’s confusing take on godshood is its great weakness; if the gods stink then why should Thor risk everything to save them? Waititi contrives to turn Bale’s character into the Child Catcher from the horrible 1968 extrava-bore Chitty Chitty Bang Bang. (I’m sure this is intentional.) He steals a bunch of kids who are so multicultural they come from different planets, even, and puts them in a cage in an alternate dimension. He then visits them and scares them for no good reason. We saw in the movie’s opening sequence that Bale has become a god slayer because a god didn’t save his own young daughter, who died of thirst in a desert. So what’s he tormenting these kids for? He’s only kidnapped them to lure Thor to his realm because he needs Thor’s weapon, Stormbreaker.

Why does he need Stormbreaker? Does it matter?

The movie centers on Thor’s busted relationship with his ex-girlfriend Jane, who somehow also becomes Thor even though Thor is still Thor. When last Natalie Portman played Jane, in Thor: The Dark World (the third-worst of all Marvel movies, the worst being Iron Man 2 and the second-worst being Eternals), she walked through it in a fury because the Marvel people fired the director she had wanted. Portman was probably right—the director in question was Patty Jenkins, who went on to make the smash hit Wonder Woman—but she evidently vowed she wouldn’t deign to do any more Marvel stuff.  She had also won an Oscar between the original Thor and Thor: The Dark World and got a little big for her britches, if you ask me, given that she has done negligible work in the decade since.

And she does negligible work here too. Portman is supposed to bring a level of emotional honesty and delicacy to the wild proceedings, but she seems completely out of place and cannot find a center or a tone for her role. She and Hemsworth actually had a good rhythm going in the original Thor but his transformation into a wacky comic character doesn’t give her much to play against. And her character’s transformation into a superhero is (I can hardly believe I’m typing these words) not credible.

The thing about crazy comedies is that their plots are often disastrous and there are stretches of boring pointlessness. But over time, you forget those and you only remember the highs. My guess is that while Love and Thunder will always be overshadowed by Ragnarok, it is a movie people will recall with fondness and will come to seem a classic a decade hence.

Was Hunter’s Russian Escort Paid for by Joe? – PJ Media

This $4 Serum Manages Frizz and Adds Shine to Damaged Strands