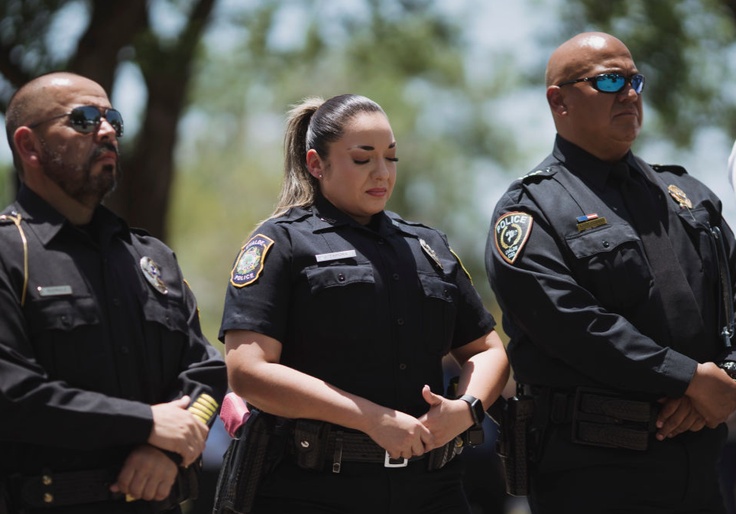 As a gunman approached Robb Elementary School in Uvalde, Texas, one police officer had an AR-15 trained on the suspect. Had he taken the shot, a report from the Advanced Law Enforcement Rapid Response Training Center concluded last week, 2 teachers and 19 children might still be alive.

Instead, the officer turned to his supervisor and requested permission to engage. By the time he turned back around, the suspect was already inside the school. Given the circumstances, the report argued, a “reasonable officer” would have pulled the trigger.

But when cops in Texas have pulled the trigger under similar circumstances, they’ve ended up in court. In at least three cases since 2014, the Fifth Circuit Court of Appeals sided against police officers who made split-second decisions to shoot armed suspects—one of whom appeared to be headed for a Texas high school. The court, which has jurisdiction over the Lone Star State, denied several officers’ requests for qualified immunity, a legal defense that protects police from civil lawsuits.

It also sent an entire county to trial for the actions of its officers, who were responding to an active shooter in a residential neighborhood. In that case, Winzer v. Kaufman County, police shot a suspect who was bicycling toward them with a gun.

“If we want to stop mass shootings,” Fifth Circuit Judge James Ho wrote in a blistering dissent in Winzer, “we should stop punishing police officers who put their lives on the line to prevent them.”

These cases form the legal backdrop to the worst school shooting in Texas history, which unfolded as police waited more than an hour before entering the fourth-grade classroom where a shooter had barricaded himself. It is impossible to know what was going through the officers’ heads as they checked their phones, sanitized their hands, and ignored parents’ desperate pleas for them to storm the school. But one thought may have crossed their minds: What will happen to us if we make the wrong call?

The answer, judging from the Fifth Circuit’s jurisprudence, is that the officers could go to trial. Each of the court’s verdicts against the police drew scathing dissents from a handful of judges, who warned that the rulings would encourage cops to hesitate in life-and-death situations. Read in the aftermath of Uvalde, the dissents are eerily prescient.

“The majority opinion,” Judge Edith Clement wrote in Winzer, “instructs [officers], in that pivotal split second, to wait. But when a split second is all you have, waiting itself is a decision—one that may bring disastrous consequences.”

The verdicts from the Fifth Circuit, long considered the most conservative appellate court in the nation, reflect what is an emerging bipartisan consensus against qualified immunity. Qualified immunity creates breathing room for the sort of split-second decision that might have stopped Uvalde—but it does so by making it difficult to sue police officers, including those who use excessive force.

As Black Lives Matter has drawn attention to cases of police misconduct, a growing chorus of liberals and libertarians has argued the trade-off isn’t worth it. The New York Times in 2021 called for an end to what it termed the “doctrine that enables police brutality,” while a 2020 report from the Cato Institute dubbed qualified immunity a “moral failure.” Faced with demands to defund the police, moderate Democrats have framed qualified immunity as a more productive punching bag, proposing legislation to curtail or eliminate it.

The Fifth Circuit dissents—and the brutal school shooting they prefigured—highlight the risks of such proposals, especially as police departments hemorrhage officers in the wake of George Floyd.

Unfounded lawsuits can have “devastating costs,” Jones said in a 2019 dissent, including “the deterrence of able people from going into public service, and the danger that fear of being sued will discourage officials from vigorously performing their jobs.” Those costs are “particularly stark today,” Ho said in a separate dissent, “given widespread news of low officer morale and shortages in officer recruitment.”

Police shortages have increased 911 response times in several cities—including Dallas and Austin—amid a nationwide spike in violent crime. The shortages also come amid a 20-year high in the number of active shooter incidents, according to data from the Federal Bureau of Investigation.

It is difficult to know how much court verdicts affect an officer’s decision to use force. Some research finds that cops know relatively little about qualified immunity and make split-second decisions based on instinct alone. But even if police aren’t thinking about appellate court precedents when they zero in on a suspect, said Rafael Mangual, a policing scholar at the Manhattan Institute, lawsuits can still diminish morale and encourage officers to be less aggressive in the field.

“Police feel like they won’t get a fair look if they get in trouble,” Mangual said.

In theory, qualified immunity is an exacting standard. To sue an officer for excessive force, plaintiffs must show that the officer’s conduct was “objectively unreasonable” and violated “clearly established law,” in part by finding an earlier case with a near-identical fact pattern in which the court ruled for the plaintiff. “Reasonableness,” the Supreme Court has said, “must be judged from the perspective of a reasonable officer on the scene, rather than with the 20/20 vision of hindsight.”

Some lower courts have made that standard extremely forgiving for cops: The Sixth Circuit, for example, gave immunity to an officer who sicced a dog on a suspect after he’d already surrendered. But other courts have been less lenient, sending officers to trial for shooting suspects who seemed seconds away from violence.

Enter the Fifth Circuit. Though some commentators have painted it as aggressively pro-cop, the court has been fairly stingy about granting qualified immunity—even after the Supreme Court rebuked it in 2015 for second-guessing the police.

That rebuke came in the case of Mullenix v. Luna, which involved a high-speed car chase with an armed suspect who had repeatedly threatened to shoot the officers pursuing him. The suspect was approaching an overpass where an officer was laying down spike traps, meaning he would be exposed to gunfire from the car’s window. With seconds to go before the suspect encountered his colleague, another officer, Chadrin Mullenix, fired at the car’s radiator from atop the overpass, hoping to disable the engine block. He missed and killed the suspect instead.

The Fifth Circuit denied the officer’s request for qualified immunity, saying he had not acted “objectively reasonably.” The Supreme Court said otherwise, overruling the Fifth Circuit. “Qualified immunity protects actions in the ‘hazy border between excessive and acceptable force,’” the Court’s opinion reads.

For officers in Texas, that protection was short-lived. In a pair of 2019 cases, Cole v. Carson and Winzer v. Kaufman County, the Fifth Circuit sided against police who fired on armed suspects—both of whom appeared to be on the verge of committing mass shootings.

Cole was a “red flag case if ever there was one,” Judge Jerry Smith wrote. The suspect, 17-year-old Ryan Cole, had just broken up with his girlfriend and was walking in the direction of the high school she attended, a loaded handgun pointed to his temple. He had stolen at least three weapons from his parents’ gun safe; had deposited a cache of ammunition at a friend’s house; had threatened to kill himself and his girlfriend; and was in the vicinity of both a high school and an elementary school, which officers were protecting because of his threats.

When the police caught up to Cole and told him to drop his weapon, he refused, began shouting obscenities at them, and fled into a nearby bush. Some time later he emerged with his back to the officers and the gun to his forehead before turning toward the police.

Before he could complete his turn, they fired. The Fifth Circuit sent the officers to trial because Cole’s gun was not pointed directly at them, and because they had not given him a warning in the brief moment before he began turning around. “What ‘clearly established law’ says that only a rogue cop would have shot at this mentally disturbed teenager within 3 to 5 seconds as the teen emerged from dense bushes ten to twenty feet away,” Judge Edith Jones wrote in her dissent. “Neither we nor the Supreme Court has ever held that police officers confronted in close quarters with a suspect armed and ready to shoot must hope they are faster on the draw and more accurate.”

Why has the Fifth Circuit—a “court stacked with far-right Trump goons,” as the progressive law professor Lisa Needham put it—been less gung-ho about qualified immunity? Part of the answer may lie in its increasingly libertarian composition. One Trump-appointed judge, Don Willet, is a hero of the libertarian legal movement and an outspoken critic of qualified immunity, which he has blamed for “untold constitutional violations.”

There is also a lively debate among originalist judges about the historical basis for qualified immunity. Even its defenders concede that parts of the doctrine are judicial inventions with no grounding in statute.

“The ‘clearly established’ test has no historical basis,” said Scott Keller, a former Texas solicitor general who has published academic scholarship on qualified immunity, referencing the requirement that plaintiffs find an earlier case nearly identical to their own.

But Keller cautioned against throwing the baby out with the bathwater. “Just because it has no historical basis, it doesn’t necessarily follow that you should scrap qualified immunity across the board,” Keller said. “Even if you think there’s something wrong with the current qualified immunity doctrine, police immunity is not all or nothing.”

For example, Keller argued in a Stanford Law Review article, courts could replace the “clearly established” test with a lower, “subjective good-faith” standard. Plaintiffs would no longer need to find a case with a similar fact pattern, but would need to show that an officer had “improper motive.” That would allow lawsuits in a wider range of cases, Keller argued, while still allowing courts “to dismiss insubstantial claims.”

At the very least, there is nothing in the Constitution that prevents courts from striking a middle ground. “The Fourth Amendment prohibits ‘unreasonable searches and seizures,’” Ho wrote in his Winzer dissent—”not reasonable efforts to protect citizens from active shooters.”

CNN finds self-proclaimed NRA Republican who now questions why he owned an AR-15 –...

Seminar: The intangible resources for the future of Trentino – The case of language...

Is Greece ready for wildfire season? | Europe | News and current affairs from...