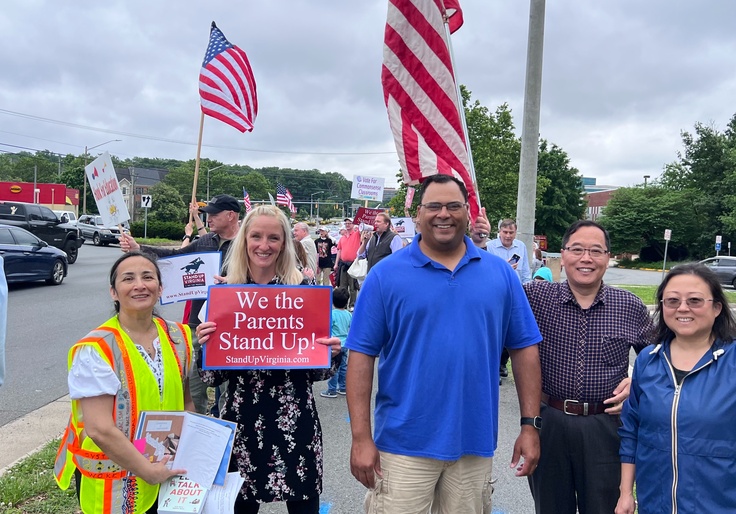 A Virginia school district will suspend students from fourth grade on up for using the wrong pronouns to designate transgender peers, igniting a fierce backlash from parents during a Thursday school board meeting.

The Fairfax County School Board voted eight to four to approve guidelines that will discipline students who engage in “malicious misgendering,” “malicious deadnaming,” or use a slur based on a classmate’s “gender identity,” “gender expression,” or “sexual orientation.” The board approved the rules as part of next year’s school handbook. Four board members who objected did so for reasons unrelated to the suspension provision, preferring to debate a run-of-the-mill cell phone policy for an hour after fielding heated questions from parents.

The meeting showcased the power liberal school boards wield in America, as the members approved the rules over strenuous objections from parents on constitutional grounds and potentially under threat of lawsuits. While one board member acknowledged the concerns, another board member, Karl Frisch, evaded questions, saying the changes had already been implemented last year, though parents pointed out the school district quietly implemented them during the pandemic. A third, Abrar Omeish, floated the idea of nixing the public question period at the next meeting.

It equally showed parents’ frustration over their lack of influence, and their willingness to pull their children out of public schools due to their ideological drift. In a charged session that stretched late into the evening, many mothers questioned the legality of the new handbook rules as well as their necessity, citing learning loss for their children during the pandemic. One father told the Washington Free Beacon he would withdraw his kids from Fairfax County Public Schools if the “misgendering” rules passed. He mentioned two other parents he knew who had said the same.

Barbara Eckman is a mother of four boys, two of whom are gay. She told the school board she will homeschool her children now to avoid “activist policies” and redress learning gaps, saying she is having to do “the job that Fairfax County couldn’t.”

“I am both a loving mother and an ally to the Pride community,” Eckman said. “The fact that I do not support overwhelming, overreaching activist policies that violate First Amendment rights has nothing to do with how I feel about the gay and transgender community. … I have liberal and conservative friends, and when I discuss your proposed policies—the co-ed family life education and transgender unit in fourth grade, the potential suspensions for misgendering and deadnaming for kids as early as fourth grade—they’re all astonished. So this leads me to one question: Who are you really representing?”

A coalition of parents, conservative grassroots groups, political actors, and one erstwhile Trump administration official rallied before the vote. Many stayed to voice concerns during the open question period, though most left by the time of the vote, expecting unfavorable results. Of the 13 who addressed the school board, 8 rose in opposition to the new handbook.

“I’m here to stop these Maoists,” former deputy assistant to Donald Trump Sebastian Gorka told the Free Beacon, before giving a speech at the parents’ rally in opposition to the school board vote.

Stephanie Lundquist-Arora, who organized the rally and is a mother of three Fairfax students, is encouraging parents to refuse to sign off on the new handbook when asked by schools.

Ruth Sent Us tweets ‘a special message for Ashley Kavanaugh and your daughters’ – twitchy.com

“It is a blatant disregard for the community feedback they’ve received, for parental rights in general, and for the First Amendment,” Lundquist-Arora told the Free Beacon. “Given that only 38 percent of Virginia’s fourth graders are proficient in reading, I think the FCPS Board’s enthusiasm to improve primary school students’ reading skills and general education should exceed their ambition to pass draconian laws to suspend them and compel their speech.”

The school board’s vote was a foregone conclusion, given the long reach of the Supreme Court’s 2020 ruling in Bostock v. Clayton County. Democratic politicians including President Joe Biden and then-Virginia governor Ralph Northam used the decision to prohibit discrimination based on “gender identity” or “sexual orientation.” State and local education bodies then implemented policies to the same end, citing the executive measures. Virginia’s Education Department in 2020 drafted a model plan for transgender students that formed the basis of the Fairfax County School Board’s eventual handbook rules. The plan recommended punishments for discrimination, harassment, or bullying, and identifying and maintaining records based on gender identity and sexual orientation.

Fairfax County Public Schools has spent about $16 million in legal fees since 2020. One lawsuit involved race-based discrimination for admission to one of the nation’s top high schools, which was aimed at reducing its Asian-American student population. America First Legal, a conservative legal group, had warned board members before Thursday’s vote that the new rules suspending students for “misgendering” may be unconstitutional.

“No discernible effort is being made to improve our students’ reading, writing, and math skills,” Steve Rogers, a district Republican leader, told the Free Beacon. “That is where they should focus their time, and we need to hold them accountable in the 2023 election.”

Jeff Hoffman, a father of three Fairfax students, told the Free Beacon nearly half of the county supports candidates who may soon be announced to challenge the school board.

“We are fed up with political agendas in our common sense classrooms, which according to public statement from the FCPS most gender identity measures were passed in 2020,” Hoffman said. “The parents of this county are awake, aware, and ready to vote for change. This is just the beginning.”

Who Made the American Flag?

Biden falls while getting off his bike after a beach ride : NPR