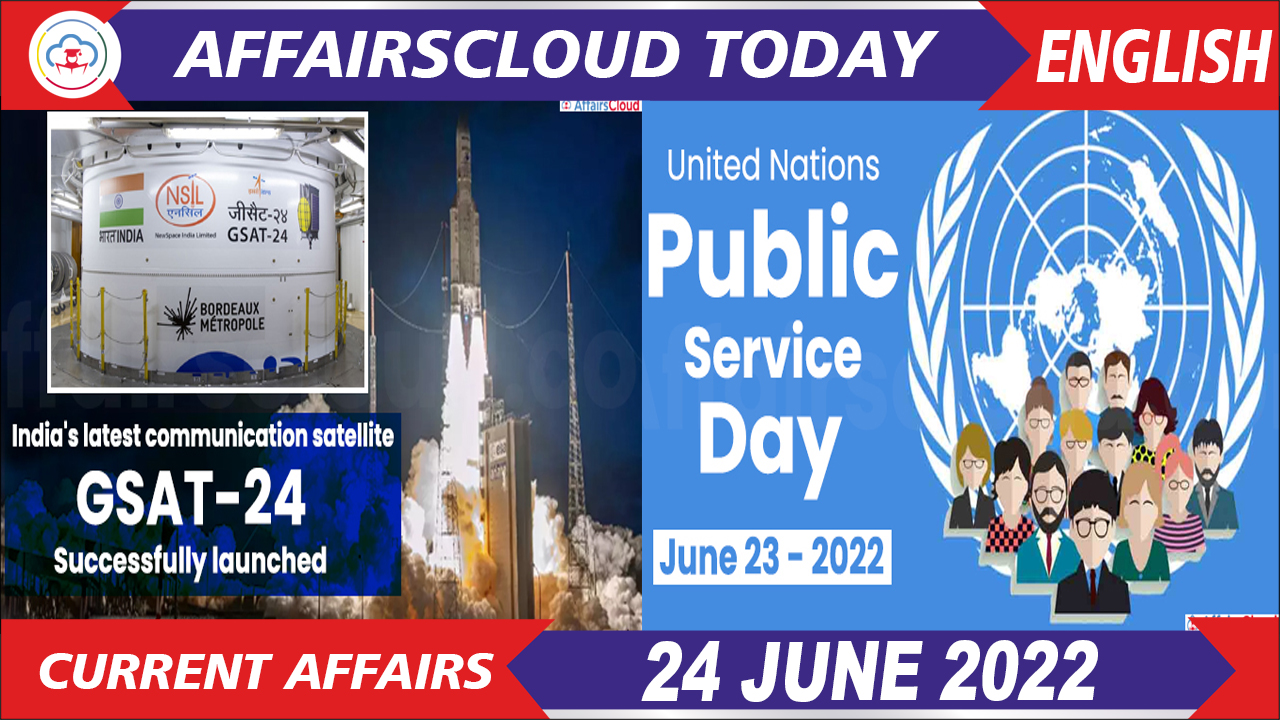 Our Current Affairs January 2022 events will help you to get more marks in Banking, Insurance, SSC, Railways, UPSC, CLAT and all State Government Exams. Also, try our Latest Current Affairs Quiz and Monthly Current Affairs 2022 PDF which will be a pedestrian to crack your exams. Delhi’s Indira Gandhi International (IGI) airport becomes the 1st airport in India that switched to hydro and solar power for its consumption needs from 1st June 2022, to run entirely on a combination of these forms of green energy. The majority of the consumption is hydro dependent.

Key Highlights:
i.Since 1st June 2022, around 6 percent of the airport’s electricity requirement is being met from on-site solar power plants, while the remaining 94 percent energy is from hydropower plants.

ii.The other green initiatives at the airport include green buildings, green transportation measures such as electric vehicles, improving operational efficiency to reduce emissions and management of greenhouse gases (GHG) as part of the Airport Council International’s (ACI) Airport Carbon Accreditation.
Other facts:
i.In June 2022, 62 electric vehicles will be added to its fleet of vehicles, thus phasing out all its diesel and petrol vehicles.
ii.In 2020, the Delhi airport became the 1st in the Asia-Pacific region to achieve ‘Level 4+’ under ACI’s airport carbon accreditation program.
iii.In 2019, DIAL had introduced TaxiBots, a vehicle that allows aircrafts in taxiing without turning on the engines, thus further reducing carbon emissions.
Note – In 2015, the Cochin International Airport in Kerala became the 1st airport in the world to run using solar energy.
About New Delhi:
Lieutenant Governor – Vinai Kumar Saxena
Lakes – Sanjay Lake, Bhalswa Horseshoe Lake, Najafgarh Lake The International Atomic Energy Agency (IAEA) has launched a new database of the  Information System on Occupational Exposure in Medicine, Industry and Research (ISEMIR), that targets workers in industrial processes involving naturally occurring radioactive material (NORM), which can be termed as ISEMIR-N.
Highlights:
i.Globally, there are over 24 million workers in various industries such as mining, oil and gas production, mineral sands, water treatment, metal refining and recycling, phosphate production, and geothermal energy, who are monitored to ensure radiation safety as they are exposed to NORM.
ii.About NORM – NORM is any naturally occurring material which contains radionuclides of natural origin such as Uranium-238 (U-238), Thorium-232 (Th-232), and Potassium-40 (K-40).
iii.ISEMIR-N can be found through the newly remodelled Occupational Radiation Protection Networks (ORPNET) platform, since its launch in June 2022.

About ISEMIR:
ISEMIR is an information system that allows workers in radiation protection in medicine, industry, and research to provide information to both the IAEA and other stakeholders registered for ISEMIR on the type of exposures and level of exposure the workers are subjected to. 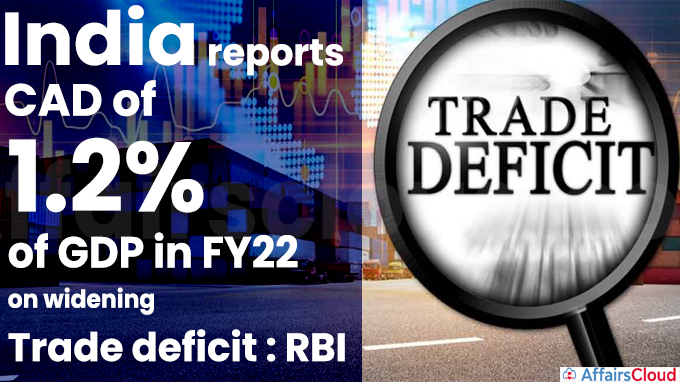 i.On June 22, 2022, the Reserve Bank of India (RBI) released data on India’s balance of payments (BoP) for the fourth quarter (Q4), i.e., January-March 2021-22/FY22.
ii.As per it, India’s current account deficit (CAD) decreased to US$ 13.4 billion (1.5% of GDP) in Q4:FY22 from US$ 22.2 billion (2.6% of GDP) in Q3:FY22 due to a wider trade deficit.
iii.On annual basis, CAD recorded a deficit of 1.2% of GDP in FY22 as against a surplus of 0.9% in FY21 because the trade deficit widened to USD 189.5 billion in FY22 from USD 102.2 in FY21.
iv.RBI has barred loading of non-banking, Prepaid Payment Instruments (PPIs) such as wallets and prepaid cards, from credit lines. However, RBI guidelines permit PPIs to be loaded by either cash, debit to a bank account, credit & debit cards and other payment instruments.
About Reserve Bank of India (RBI):
Establishment– 1st April 1935
Headquarters– Mumbai, Maharashtra
Governor– Shaktikanta Das
>> Read Full News 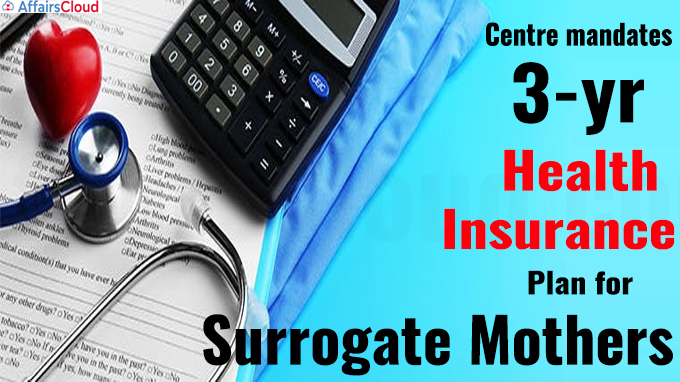 As per the new surrogacy rules issued by the Government for the benefit of Surrogate mothers, couples who wish to become parents through surrogacy must buy 3-years (36 months) health insurance plans for surrogate mothers.

New Rules:
i.According to the new surrogacy rules, the 36 months health insurance for surrogate mothers should be availed from an insurance company or an agent recognized by the Insurance Regulatory and Development Authority of India (IRDAI).
ii.The insured amount must be sufficient to cover all expenses for all complications arising out of pregnancy and also covering postpartum delivery complications.
About Ministry of Health and Family Welfare (MoHFW):
Union Minister – Mansukh Mandaviya (Rajya Sabha – Gujarat)
Minister of state – Bharati Pravin Pawar
>> Read Full News 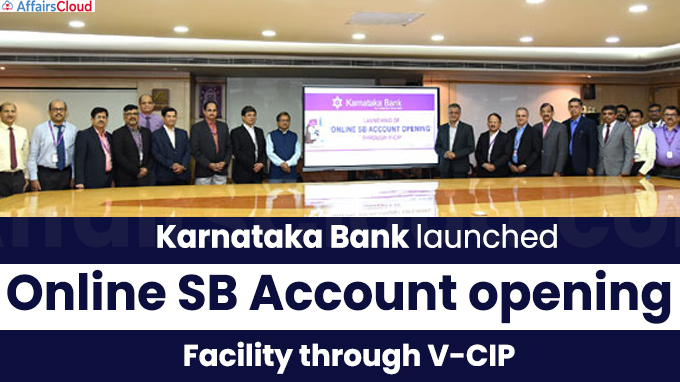 Key Points:
i. The feature is enabled on the bank’s corporate website and allows potential clients to open an SB account online and complete the KYC verification via a video call at their convenience.
ii.The end-to-end paperless digital procedure makes use of the bank’s API (Application Programming Interface), which auto fills the account opening form, instantly validates PAN (Permanent Account Number)/Aadhaar numbers, and completes the KYC process via video call.
iii. The bank plans to concentrate on developing into the “digital bank of the future” in the long run by focusing on the “KBL NxT” concept under Wave 2.0 of its transformation journey, “KBL-VIKAAS,” and many other initiatives.
About Karnataka Bank Limited:
MD & CEO – Mahabaleshwara M.S
Establishment – 1924
Headquarters – Mangaluru, Karnataka
Tagline – Your Family Bank Across India 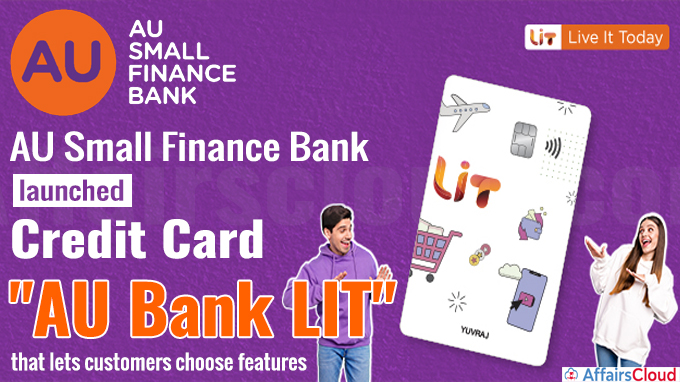 Features of AU Bank LIT (Live-It-Today) Credit Card
i. Customers may track their savings and earnings everyday with the AU0101 app, allowing them to maximise their benefits with the LIT credit card.
ii.The card offers a number of benefits, and customers can activate any feature on-the-go in real time for a nominal convenience fee.
iii. The LIT gives the cardholder entire control over the offers it makes and the fee they pay for them in a clear, transparent manner, saving the cardholder on annual or renewal fees for benefits they don’t utilise.
iv.By utilising the features provided, cardholders can get the best Cashbacks and Reward Points. Every feature comes with a 90-day default validity period.
v.LIT Credit Card offers five categories of features, namely:Lounge Access; Milestone Benefits; OTT (over-the-top)& Lifestyle Memberships; Accelerated Rewards (Online/Offline); and Other Features.
Note: 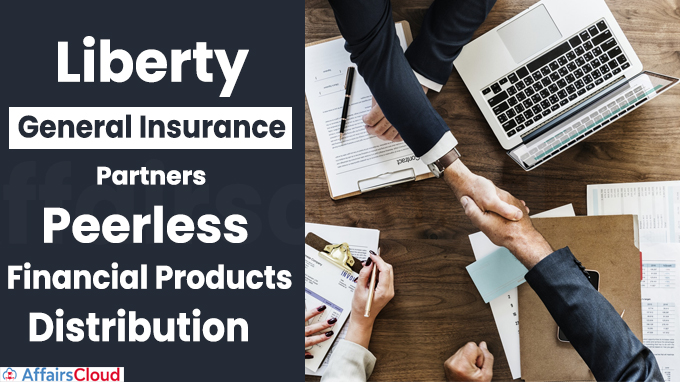 Airtel Payments Bank has partnered with Muthoot Finance to offer gold loans through the Airtel Thanks app. This will add to the Airtel Payments Bank’s digital banking products portfolio and will enable easy credit access for its customers.
Under this partnership, Muthoot Finance will provide up to 75% of the pledged gold value as a loan and there will be no processing charge on the loan. The customers can also get doorstep disbursals for loan amounts of Rs 50,000 and above. i.On June 22, 2022, the NewSpace India Limited’s (NSIL), GSAT (Geosynchronous Satellite)-24 satellite was successfully launched through Ariane-5 Rocket/Ariane Flight VA257 by French company Arianespace from the Guiana Space Centre, in Kourou, French Guiana in South America.
ii.GSAT24 is built by Indian Space Research Organisation (ISRO) for NSIL.
iii.It was the 25th Indian satellite launched by Arianespace and the 11th of the GSAT series.
iv.It should be noted that, along with GSAT-24, Ariane 5 launcher also carried the MEASAT-3d satellite for Malaysia. With this, the total payload of the launcher was approximately 10,863 kg.
About NewSpace India Limited (NSIL):
Chairman& Managing Director– Radhakrishnan Durairaj
Headquarters– Bengaluru, Karnataka
>> Read Full News 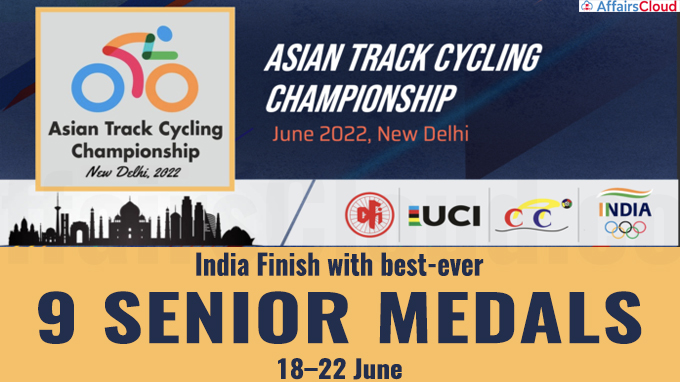 Participants from 15 countries competed at the 41st edition of the continental championship.

Ronaldo Singh became the first Indian cyclist to win silver in a continental championship in the senior category on the final day of the Asian Track Cycling Championships (ATCC) 2022, coming second in the sprint event.

The silver that Ronaldo won at the ATCC 2022 was the first individual medal ever won by an Indian.

On June 22, 2022, Ronaldo Singh of India won a historic silver medal in the men’s sprint at the Asian Track Cycling Championship (ATCC) 2022. Ronaldo also celebrated his 20th birthday on the same day.

The Asian Track Cycling Championships 2022 is a level 1 event of the Union Cycliste Internationale (UCI), the world cycling governing body, and it also serves as a qualifying event for the Paris 2024 Olympics.

After the 2013 and 2017 editions, India has hosted the championship for a third time in 2022. South Korea hosted the 2020 Asian Track Cycling Championships in October 2019. He became the first Indian weightlifter to win a Gold Medal at the IWF Youth World Championships.

Note: India did not participate in the previous edition, the 2021 IWF Youth World Championships, held in Jeddah, Saudi Arabia.
Medal winners from India:

Additional info:
Sanapathi won the gold medal in the 55 Kg Men category, in which Ali Majeed from Saudi Arabia has won the silver medal and Yerassyl Umrov of Kazakhstan won the bronze medal. Background:
i.In 1947, Dr Josef Gruss member of the IOC from Czechoslovakia proposed to organise an event to commemorate the founding of the Modern Olympic movement and to promote Olympic ideals.
ii.At the 42nd IOC Session in St Moritz, Switzerland in January 1948, the members of the IOC adopted the project of a World Olympic Day.
About International Olympic Committee (IOC):
President– Thomas Bach
Headquarters– Lausanne, Switzerland
>> Read Full News 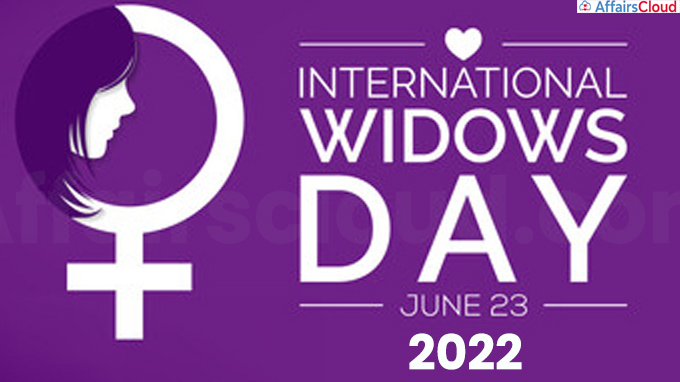 The United Nations(UN)’s International Widows’ Day is annually observed across the globe on 23rd June to voice out the experiences of the widows and to take action to provide the support they need. 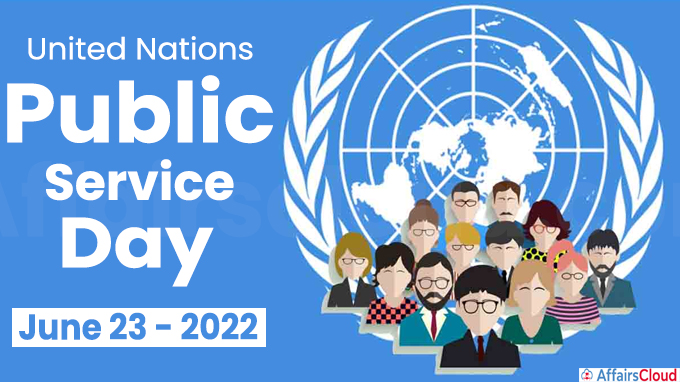 About the MoUs:
i.One MoU was with the Indian Institute of Management (IIM), Bangalore to scale up at least 100-150 existing women-owned or women-led enterprises in the state.
ii.Another, signed with Subhiksha, a multi-state cooperative society that is into organic farming would create a direct linkage with the consumers through the online marketing platform ‘Subhiksha Farmers to Consumers’ app.

Highlights:
i.The store is spread over 12.2 acres (4.6 lakh square feet) and is the largest IKEA outlet in India that is located close to the Nagasandra station of Bengaluru Namma metro.
ii.IKEA has decided to invest about Rs 3,000 crore in Karnataka, with an expectation to attract about 5 million visitors in 2022.

The Government of Tamil Nadu(TN) has launched a skilling Programme called “Nalaya Thiran” (Tomorrow’s ability) under the “Naan Mudhalvan” (I am the first), the umbrella programme of Chief Minister(CM) MK Stalin. This programme will provide hands-on experience on problems and help the industry to get skilled students. (This is not a pilot programme).